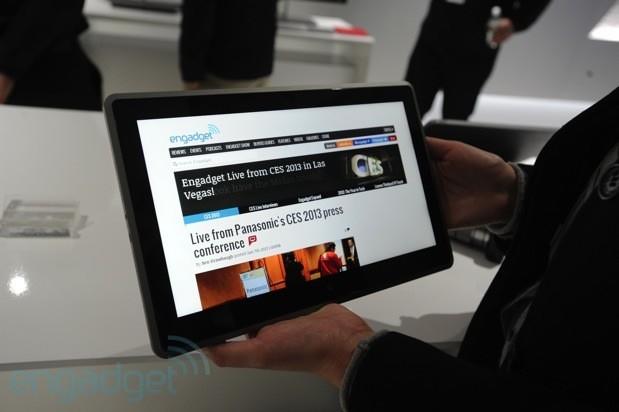 Vizio's not exactly a stranger to tablets -- it came out with an Android product back in 2011 -- but it's only just debuting its first Windows 8 slate, the Tablet PC. (How's that for an appropriate name?) Like so many other Win 8 tablets it has an 11.6-inch screen, but the similarities mostly end there. On the inside, it packs a dual-core, 1GHz AMD Z60 chip, making it one of the few tablets in this class that doesn't run an Atom processor. At the same time, the screen squeezes in 1,920 x 1,080 pixels -- an unusual resolution for a lower-powered product like this. Other known specs: 2GB of RAM, 64GB of flash storage, a 2-megapixel front camera and micro-HDMI / micro-USB ports. So far, we don't know how much this will cost, or even when it will be available, so it's going to be a little tough to compare this to other offerings in the marketplace. For now, though, we've managed to steal a few minutes of hands-on time here at CES. Meet us past the break for some first thoughts on the design, the performance and that crisp 1080p screen. And stay tuned for video -- we've got that coming too. Update: As promised, our video tour of the tablet can be found after the break.

When we first read this tablet's spec sheet, we started bracing ourselves for one thick, heavy device. To be sure, it's neither the thinnest nor the lightest at 0.4 inch thick and 1.66 pounds, but we'll say this: it's a lot easier to hold than we thought it would be. We're pretty sure the build materials have a good deal to do with that. The backside has a rubbery, soft-touch finish that's easy to press your fingers up against. (It also hides fingerprints and looks good, to boot, so that's a plus.) Additionally, there's some slight beveling on the front side of the device around the display -- just enough that there's a little groove where you can rest your thumbs.

As you'd expect, that 1080p resolution looks nice on such a relatively small screen, but beyond that, we were also impressed by the viewing angles. Vizio says this isn't technically an IPS display, though the panel does make use of some other wide-angle viewing technology (Vizio wouldn't say which one). Whatever it is, we were able to follow along with The Lorax off from the side and also with the tablet placed face-up. That last point is particularly salient here, as we're not 100 percent sure there will be a dock to go with this. Vizio says it's still evaluating its options as far as peripherals go. If we had to guess we'd say some accessories are coming; it's just that Vizio wasn't ready to show them here at CES. At least, that's what we'd do if we were running a consumer electronics company. Coming out with a dock-less Windows 8 tablet would be pretty insane, no?

The audio is also promising. Mind you, we didn't exactly have the chance to roll through out extensive music library, but we were encouraged to find that the tablet has stereo sound, with two speaker grilles each on the right and left edges. That alone seems like an act of common sense on Vizio's part: far too many tablet makers stick the speaker openings on the back side, which means unless you have the device propped up in a dock, the audio's bound to get a little muffled.

With performance, too, we only got a brief look at what AMD's Z60 chip can do, but suffice to say we're cautiously optimistic after getting some early hands-on time. Scrolling through webpages in IE 10 felt smooth, and we shockingly didn't notice any tiling as we zoomed in and out. The device was also quick to launch apps, as well as close out of them abruptly if ever we changed our mind and hit the Start button. That Start button, by the way, delivers some strong, reassuring haptic feedback -- stronger than on some other Windows 8 tablets, that's for sure.

The one thing that gave us pause was movie playback. We mentioned that we watched a few minutes of The Lorax and while the file generally played smoothly, we noticed some isolated bits that seemed ever so slightly slowed-down. We had to wonder if perhaps the chip was struggling a bit with that HD content. We're happy to reserve judgment today, but we'll keep those concerns in the back of our mind when we get the chance to test a final unit (and maybe even watch a whole dang movie). For now, though, this seems like a fine piece of hardware, and we're glad to see Vizio and AMD giving Intel Atom chips a little much-needed competition.

In this article: ces, Ces2013, ces2013-highlight, hands-on, video, vizio, VizioTabletPC, Windows8, Windows8Tablet
All products recommended by Engadget are selected by our editorial team, independent of our parent company. Some of our stories include affiliate links. If you buy something through one of these links, we may earn an affiliate commission.