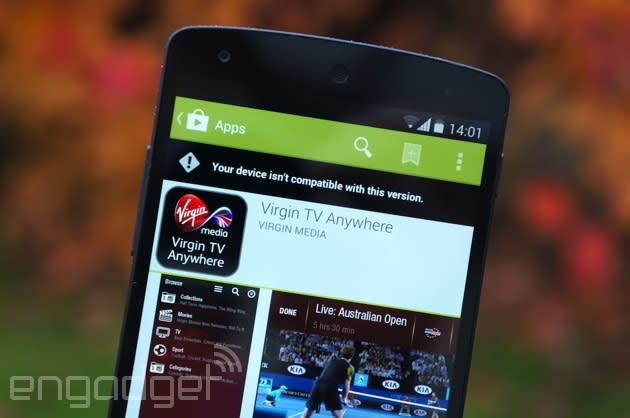 It took a while, but Virgin Media has finally brought its TV Anywhere service to Android. Already available on the iPhone and iPad for more than a year, the app comes to Android smartphones and tablets with nine new UK TV channels including Alibi, Dave, Drama, Good Food, Home, Really, Watch, Yesterday and CBS Reality. That takes the total number of mobile channels up to 67, with up to 90 available online. Virgin Media boasts it now offers more choice than rival service Sky Go, but like it's competitor, some might be frustrated by the patchy support for Android devices. Although you'll find support for Samsung's Galaxy S4 and Galaxy Note, HTC One, Sony Xperia Tablet Z and Google's Nexus tablets, you might experience issues if your device is running Android 4.4 KitKat. While you won't be able to install it on your Nexus 5 just yet, Virgin says more Android devices will join the line-up "in the very near future."

In this article: android, app, hdpostcross, mobilepostcross, streaming, tv anywhere, virgin, virgin media
All products recommended by Engadget are selected by our editorial team, independent of our parent company. Some of our stories include affiliate links. If you buy something through one of these links, we may earn an affiliate commission.