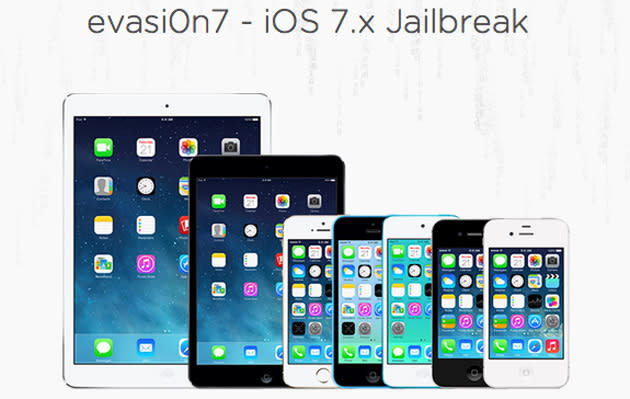 You've mostly been out of luck if you've wanted to jailbreak iOS 7 so far; what options have existed have been incomplete at best. Cracking the code just got a lot easier, though, as evasi0n 7 has just arrived. The untethered jailbreak lets Mac and Windows users freely modify iOS 7 on any device that can run the software in the first place, including newer gadgets like the iPad Air and iPhone 5s. Just be prepared for a rough experience, at least with early versions. In addition to the usual risks associated with unofficial OS tweaks, Saurik (Jay Freeman) warns that he hasn't had a real chance to test Cydia's app distribution platform with the new evasi0n release; you're using it at your own risk. Still, those who just have to venture beyond Apple's prescribed boundaries can start downloading the jailbreak at the source link.

In this article: apple, cydia, evad3rs, evasi0n, ios, ios7, ipad, iphone, ipodtouch, jailbreak, mobilepostcross, untethered
All products recommended by Engadget are selected by our editorial team, independent of our parent company. Some of our stories include affiliate links. If you buy something through one of these links, we may earn an affiliate commission.