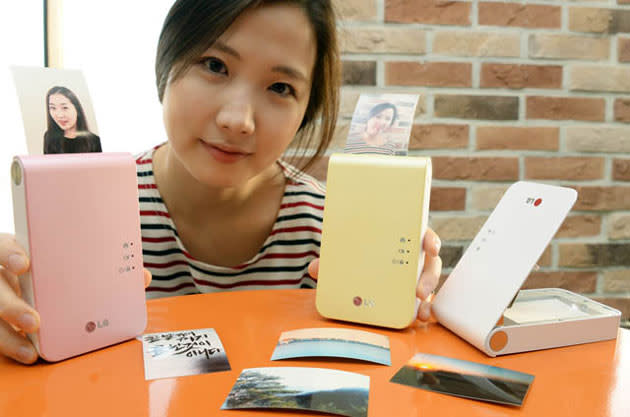 We'll have to take LG's word on the success of its Pocket Photo mobile printer. Primarily because we fear the lady above and her soul-stealing stare, but also 'cause it would explain the investment in a sequel. LG's Pocket Photo 2 is slightly thinner than its predecessor, and is said to have an improved battery life with 30 photos' worth of juice. Printing resolution has been upped to 600 DPI and the platforms graced with companion apps are listed as Android, iOS and Windows 8. Otherwise, it's much the same as the original -- you pair up via NFC/Bluetooth, and can add QR codes and text to images before printing, as well as filters for the Instagram generation. Prior to a wider launch, the Pocket Photo 2 will hit Korea for an unspecified price in mid-January, shortly after LG tries to drum up interest for it at CES.

In this article: ces, ces2014, lg, lgpocketphoto, lgpocketphoto2, mobilepostcross, pocketphoto, pocketphoto2, printer, printers
All products recommended by Engadget are selected by our editorial team, independent of our parent company. Some of our stories include affiliate links. If you buy something through one of these links, we may earn an affiliate commission.