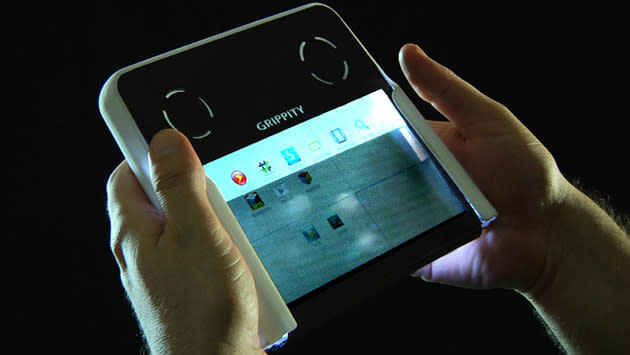 When we last saw Grippity, it wasn't much more than a pretty media center keyboard. Well, it just grew up -- its creators have revived the concept as a full-fledged, crowdfunded Android tablet. The new design still centers on a transparent, dual-sided touch surface, but there's now more to do than type. The PS Vita-style back control lets users tap interface elements without obscuring the screen, and it opens the door to more complex multi-touch gestures. The infrared remote control and thumbpads have also returned from Grippity's previous incarnation. If you're intrigued, you can pledge $235 ($159 for a few early birds) to Grippity's Kickstarter campaign to reserve a tablet for yourself; provided the team reaches its funding goal, you should have the device in your hands by October.

In this article: android, crowdfunding, grippity, infrared, kickstarter, tablet, transparent, TransparentDisplay, video
All products recommended by Engadget are selected by our editorial team, independent of our parent company. Some of our stories include affiliate links. If you buy something through one of these links, we may earn an affiliate commission.