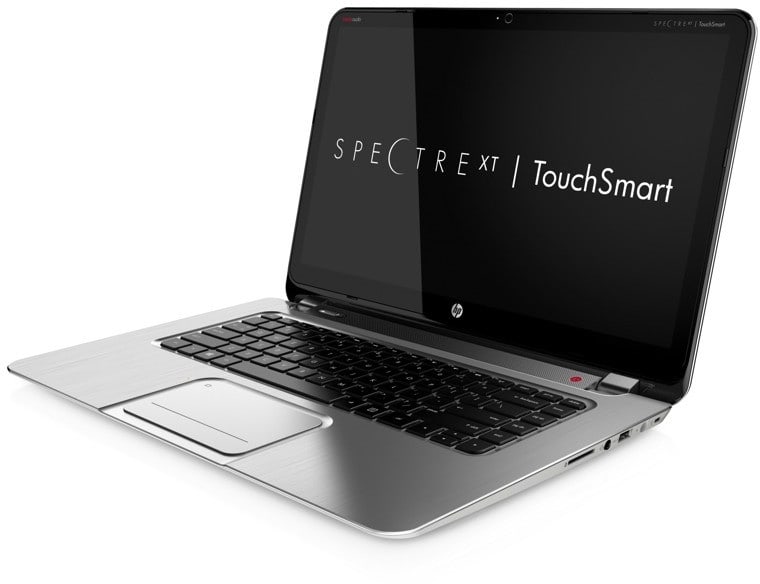 We had plenty of nice things to say about the HP Envy Spectre XT when we reviewed it last year, but we were already looking ahead to the HP Spectre XT TouchSmart, which steps up to a 1080p touchscreen. Well, here it is, and with 10-point touch and the same all-metal design as its predecessor, this 15-incher looks mighty promising. But is it worth $1,350 -- or more, if you want an SSD? Head past the break to find out.

The HP Spectre XT TouchSmart boasts a great, 15-inch touchscreen and a comfortable, svelte design. The downsides are disappointing battery life and a high starting price.

Be the first to review the Envy Spectre XT TouchSmart?
Your ratings help us make the buyer’s guide better for everyone.
Write a review

The TouchSmart will look quite familiar to those who have seen the Envy Spectre XT. It sports the same elegant, all-metal chassis and brushed-silver finish, along with a reflective HP logo on the lid. The only real difference -- apart from the TouchSmart's significantly larger footprint -- is that the Beats Audio and Spectre XT TouchSmart branding sit on the top of the display, as opposed to below the screen on the 13-inch XT. All in all, it's an attractive package, though it's also one that draws constant comparisons to Cupertino's baby.

At 4.96 pounds and 0.87 inch thick, this machine is hardly the wispiest incarnation of an Ultrabook, but it's far from bulky for a 15-inch machine. Still, you will notice its weight when toting it in your backpack or briefcase; we're not sure you'd want to carry it to work every day. Like its non-touch sibling, this notebook feels very comfortable in the hand thanks to grippable, rounded corners and a lovely soft-touch finish on the bottom. The design feels very sturdy as well; it never creaked or bent under pressure throughout our hands-on time.

Everything is in its logical place on the TouchSmart, with the speaker grille and power button sitting at the top of the keyboard deck, and the HP TrueVision HD Webcam centered above the display. The laptop's bottom is completely clean save for an air vent and two speakers; there's no removable battery here. Along the sides, you'll find a generous selection of ports. An SD card slot, 3.5mm headphone jack, USB 2.0 port, charging connector and a Kensington lock slot sit on the right side, while an Ethernet jack, full-size HDMI port, Thunderbolt and two USB 3.0 connections line the left edge. Incidentally, this is the first HP system to include a Thunderbolt port.

We were big fans of the Envy Spectre XT's keyboard, and the 15-inch TouchSmart's backlit layout is equally comfortable. It took a bit of time for this reviewer's smallish hands to adjust to the spacious setup, but the keys themselves offer a satisfying amount of travel. You should have no trouble getting up to your usual words-per-minute pace.

The large keyboard deck provides ample space for resting your palms and wrists, and it also accommodates a sizable Synaptics touchpad. The clicker executes Windows 8 gestures flawlessly, and it offers just enough resistance for scrolling to be fluid but not overzealous. The integrated left- and right-click buttons are responsive and quite good at distinguishing accidental input from intentional taps. As we've seen on previous HP systems, this machine offers a trackpad-disabling feature, which is activated with a double tap on the clicker's upper-left corner.

With a 1080p resolution and IPS technology, the TouchSmart's 15.6-inch Radiance display provides bright, crisp visuals. It's one of the best panels we've seen on an Ultrabook lately -- on par with Acer's and ASUS' latest offerings -- and it's one of the advantages this system has over the non-touch Envy Spectre XT, which sports a 1,366 x 768 screen. HP wouldn't confirm whether this is the same 1080p panel that had color calibration issues on the Envy 15, but a spokeswoman said TouchSmart users shouldn't experience that problem. (We didn't during our hands-on time.)

This is one of the best panels we've seen on an Ultrabook lately.

Colors look rich and accurate, and content is visible from even extreme off-angles. The touchscreen is very responsive to all the Windows 8 gestures you'll be throwing at it. Scrolling, swiping to bring up the Charms bar and pinching to zoom all work without a hitch. Even though we're fans of this laptop's touchpad, we often preferred navigating via the touch display -- its large screen almost begs to be touched.

Unsurprisingly, the TouchSmart packs Beats Audio, and sound pumped through the machine's tilted speaker grille is plenty loud, if not particularly rich. As is usual with Beats, we didn't detect as much tinniness as we have on other laptops, but bass is still limited. Listening to music and watching movies with headphones is definitely a more immersive, sonically pleasing experience, but it's good to know you have enough volume should you want to blast some tunes in the open air.

Our review unit is configured with a 1.9GHz Core i7-3517U processor with 8GB of RAM, Intel HD Graphics 4000 and a 500GB hard drive spinning at 5,400 RPM. The Ultrabook performed respectably on synthetic benchmark tests, such as PCMark7. When it comes to I/O performance, though, this laptop falls far behind the SSD-equipped competition -- we're talking max reads and writes of 130 and 72 MB/s, respectively, while we regularly see Ultrabooks turn in reads and writes north of 500 MB/s. If you've been impressed up until this point, don't despair: there's an SSD configuration available (more on that later), and we imagine it will offer significantly better performance.

In everyday use, the TouchSmart ran smoothly, though occasionally we noticed a few-second delay in the touchscreen's responsiveness after waking from sleep. Still, cold-booting into Windows 8 takes 12 seconds, which is on par with most Win 8 machines we've tested, and the laptop was never sluggish in switching between apps and launching programs. When we fired up a demo on Steam, the fan started whirring almost instantly. Not that the sound was incredibly loud, mind you, but the laptop's bottom felt very warm, and it took the system several minutes to pipe down after we had closed the game.

HP could have used a bigger battery to increase runtime.

When we ran our battery test, which entails playing a locally stored video on loop with WiFi on and brightness set to 65 percent, the TouchSmart's four-cell battery lasted four hours flat. We don't expect stellar longevity from larger notebooks -- especially those with touchscreens -- but the TouchSmart still falls short of our expectations. Even the much thinner 13-inch Acer Aspire S7 lasted four hours and 18 minutes; there's no reason that HP couldn't have used a bigger battery to increase runtime.

HP's pre-load definitely makes its presence known, as Norton Internet Security pop-ups will greet you upon that first boot-up -- you can either disable them or activate the complimentary two-year subscription. Other pre-installed programs include full versions of Adobe Photoshop Elements 10 and Premiere Elements 10 (signature amenities in the Spectre line) and proprietary software such as HP Support Assistant, Connected Music and Connected Photo. You'll find the standard shortcuts to the Kindle store and Netflix here, too. The Spectre XT TouchSmart comes with a two-year warranty, which is fairly generous considering that most notebooks come with just one year of protection.

We reviewed the $1,350 configuration of the HP Spectre XT TouchSmart, which includes a 1.9GHz Core i7 CPU, 8GB of RAM, Intel HD Graphics 4000 and a 500GB (5,400RPM) hard drive. The entry-level model goes for $1,275, and the only difference is that it packs 4GB rather than 8GB of RAM. For $1,520, you can upgrade to a 128GB SSD with 8GB of RAM, and $1,720 nets you a 256GB SSD with 8GB of RAM. As you can see, things get pricey when you factor in the speedier storage option, and you'll find many similar alternatives that undercut the TouchSmart's price by several Benjamins. A few of them below:

Among machines in the TouchSmart's size category, the $1,100 Dell Inspiron 15z is worth a once-over. It also offers a Core i7 processor, 8GB of RAM and a 500GB hard drive, but rather than integrated graphics it packs NVIDIA's GeForce GT 630M chip. It's a hair lighter than the TouchSmart, at 4.78 pounds, but it still manages to fit a DVD drive. It does offer a touch display, but with just a 1,366 x 768 resolution. If you don't need a touchscreen, we'd suggest the 15-inch Samsung Series 9, which delivers long battery life in a remarkably slim design. A model with a 128GB SSD, 8GB of RAM and a Core i5 CPU will set you back $1,399. And if screen size is negotiable, we recommend the ASUS UX31A Touch. The Core i7 configuration we recently reviewed is not yet available, but its fluid user experience and bright touchscreen earned our thumbs-up.

If you're game to hold out for a few more months, you could consider the Sony VAIO T15. Pricing and specs are still to come, but we found the laptop attractive and responsive when we went hands-on at CES. The new Samsung Series 7 Chronos could also be worth the wait if you aren't on a tight budget. The laptop will feature AMD's new Radeon HD 8870M GPU and a Core i7 CPU -- and it promises 11 hours of battery life. We got a taste of the product at CES, but Sammy has yet to mention pricing and availability. Finally, if short battery life doesn't dissuade you, the Acer Aspire S7 has a lot going for it. Its 1080p display rivals the TouchSmart's, and it delivered impressive scores when we benchmarked it.

Overall, HP did a great job with the Spectre XT TouchSmart, releasing a notebook with a sleek, comfortable design and a top-notch touch display. While we want to give this Ultrabook high marks, we can't overlook that the poor battery life and high price could be dealbreakers for some. If you can live with those compromises and your pockets are deep enough, by all means splurge. Otherwise, you have a host of other compelling options to choose from -- and there will only be more in the months to come.

In this article: hp, HP Spectre XT TouchSmart, HpSpectreXtTouchsmart, review
All products recommended by Engadget are selected by our editorial team, independent of our parent company. Some of our stories include affiliate links. If you buy something through one of these links, we may earn an affiliate commission.