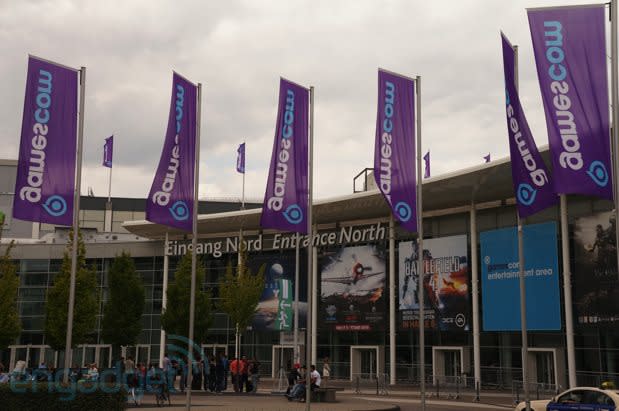 It's true -- we already gave Gamescom 2013 a quick wrap up, but now that the sun has finally set on the show's public days, it's time to look back on the past week and sift through the madness. Upon closing the Koelnmesse's doors, Gamescom announced the show's final numbers: over the course of five days 340,000 visitors from from 88 countries marched across 140,000 square meters of exhibition space. That's a 23 percent leap in attendance over the previous year, and it's hardly a surprise: the event was host to over 400 world premier announcements and gave many attendees their first look at Microsoft and Sony's next generation consoles. Combined with the more humble announcements that came out of GDC Europe, it turned out to be a pretty fantastic week for gaming. Read on for a breakdown of our time in Cologne, a look at the Gamescom 2013 show floor and a group chat between Joystiq and Engadget editors on the show's biggest announcements.

Being a console launch year, it wasn't too surprising to see Sony and Microsoft dominate the show. While both firms blew out the event with expanded game lineups and feature demos, Sony came out just a little more confident, thundering its fans with the PlayStation 4's street date and price (that'd be $399 on November 15th, by the way) and providing a live demonstration of the system's dashboard. The company also confirmed rumors of an incoming Gran Turismo film, promised 33 PlayStation 4 games by the end of the year and kicked the PlayStation Vita's retail price down to $199. We even spent a few minutes with Sony's Shuhei Yoshida to talk about the PS4's online functionality, the importance of indie gaming and, of course, his interest in the Oculus Rift.

Microsoft teased the Xbox One's operating environment too, but wasn't quite ready to show it to the public -- previewing us its next console's dashboard behind closed doors instead. While Microsoft didn't confirm its next console's launch date, it did mention that every single European pre-order of the Xbox One will come with a free copy of Fifa 14. This shyness didn't stop Microsoft Xbox VP Phil Harrison from waxing enthusiastic about the Xbox One's ID@Xbox self-publishing platform, however, and we also got a deeper look at Project Spark's Kinect-assisted game builder what makes the company's next generation motion sensor tick.

Our days in Cologne were packed with interviews, too: EA's Peter Moore told us all about the firm's dedication to connectivity, telling us that EA just "doesn't deliver offline experiences anymore." Infinity Ward's Mark Rubin talked about the challenges of developing a AAA game for six platforms and designing content for next generation consoles before having access to them. Ubisoft's Alain Corre caught up with us as well, optimistically looking forward to the second screen revolution, the potential of the Oculus Rift and a better future for the Wii U. Speaking of Palmer Luckey's homegrown VR headset, the company founder sat down with us to talk about its new developer portal, Share, which serves as a precursor to the consumer software portal that will ship with the eventual consumer headset.

Off the beaten path, Oculus VR teased Android support at GDC Europe, and we learned that CCP Games' stunning EVR demo would be reborn as EVE: Valkyrie -- practically a reason in and of itself to pick up an Oculus Rift. It wasn't the only headset with games at the event either -- a port of Escape! for Google Glass showed limited potential in the heads-up display as a gaming device, albeit a simple one. All in all, it was a monumental week, with far more news than can be summed up in a single recap. Looking to dive into these stories in more detail? Check out our Gamescom and GDC Europe 2013 event page right here to get started.

In this article: gamescom2013, gdce2013, hdpostcross, joystiq, microsoft, nintendo, playstation4, ps4, sony, video, xboxone
All products recommended by Engadget are selected by our editorial team, independent of our parent company. Some of our stories include affiliate links. If you buy something through one of these links, we may earn an affiliate commission.