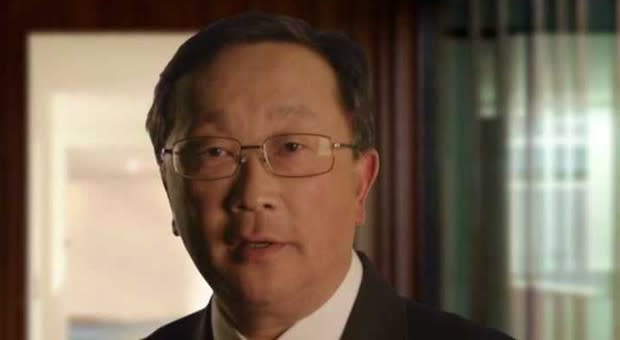 This morning's earnings report may not have been BlackBerry's favorite moment, but John Chen seems confident in his vision for the company's future -- and his ability to turn things around. Speaking with a small group of analysts and reporters, Chen mentioned that this coming year will be critical for BlackBerry, saying that it will be an investment year. We can't say we disagree; certainly the deal with Foxconn (which Chen specifies does not involve any licensing agreements, ensuring government relations remain under BlackBerry's control) will require a lot of additional effort and resources on his company's part. Chen seems adamant that this "investment" will not include layoffs, however, "if [he] can avoid it." Certainly no guarantee, of course, but Chen is confident that this quarter was just a hiccup that will help BlackBerry find future financial success, and that he expects his company to be cash flow-neutral by 2015 and profitable by 2016, and wants to do it using growth, rather than saving money through cuts. In fact, Chen plans to build up an Enterprise sales force "to take it back to the market."

Chen also spoke to his new position as chief executive, saying that the "interim" title has been removed, and he's now the man in charge for the foreseeable future. But for how long, exactly? As long as it takes to get the company on strong financial footing. "My step one was to have the company financially out of harm's way. I can't say I've done it today, but we are on a good path." He definitely wins the prize for the most confident CEO of the year.

Additionally, Chen mentioned that BlackBerry will be building a security technology center in Washington, DC to work with big government clients like the Department of Defense. This new center, which will be several thousand square feet, will primarily employ engineers (although he doesn't specify if these engineers will be transferred there or if BlackBerry will enjoy a hiring spree). This makes sense, given Chen's insistence that one of the company's biggest areas of focus must be on security for regulated industries, in which government relations will play a huge role.

Also, if you've been concerned that these recent announcements mean that the company may not put as much of an emphasis on keyboards as it has done in the past, good news: The new CEO doesn't plan to ditch keyboards anytime soon -- he mentioned that BlackBerry customers still want them, so he'll continue to listen to his customers.

In this article: blackberry, johnchen, mobilepostcross, rim
All products recommended by Engadget are selected by our editorial team, independent of our parent company. Some of our stories include affiliate links. If you buy something through one of these links, we may earn an affiliate commission.