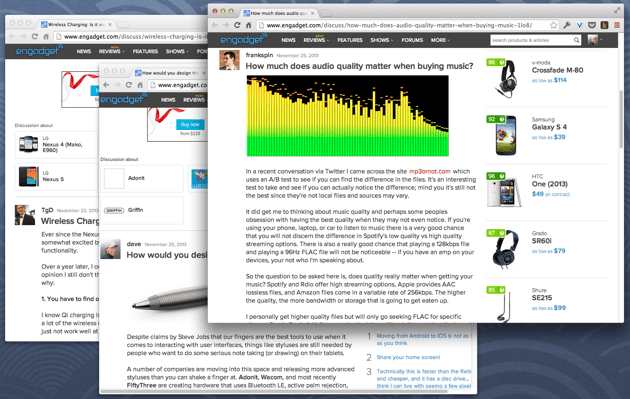 This week, the Engadget community shared how and what they name their devices, switching from Android to iOS (wait, what?), SMS alternatives to the Google Hangouts app, styluses for winter use and whether or not it's possible to finally cut the cord. Click past the break and read what fellow Engadget users like you have to say.

What do you name your computer?

Futurama characters, Dharma Initiative stations, birds and Latin words. What do all these things have in common? They're themes Engadget readers said they use when Kris asked how people name their devices. Do you name your computers, phones and tablets? If so, post your names in our forums!

Alternatives to Google Hangouts on Nexus 5?

DaBash doesn't want to rely on Google Hangouts as the primary communications application on his Nexus 5, and is looking for SMS app recommendations. "I just got my Nexus 5 and I did not like the idea of having my hangout conversations being mixed with my text messages." Do you have any recommendations? Tell DaBash what your favorite messaging app is.

Documenting the move from Android to iOS

Engadget product research team member frankspin documented his move from Android to iOS and things went a lot better than expected. "As a previous Android user I often saw a lot of Android users exclaim about how coming to Android was such a liberating experience from the grasp of Apple's walled garden. For the last few years I believed this, but over time I started to open up to what Apple and iOS have to offer." Share your own experiences when switching mobile platforms.

Winter is here. And that's why dtanders is looking for advice on styluses that would work while using thick gloves. For those of you who have to deal with the strange concept of winter (hey, we're pretty spoiled in California), what would you recommend?

Now can we cut the cord?

Each week, it seems new services and hardware are announced that make it easier for consumers to watch television and consume video content how they choose. That's why johncolucci asked if you can really cut the cord yet. Have you successfully shed the shackles of Big Cable? Tell us how you cut the cord.

In this article: Android, community roundup, Engadget, feedback loop, Nexus 5
All products recommended by Engadget are selected by our editorial team, independent of our parent company. Some of our stories include affiliate links. If you buy something through one of these links, we may earn an affiliate commission.
Share
Tweet
Share