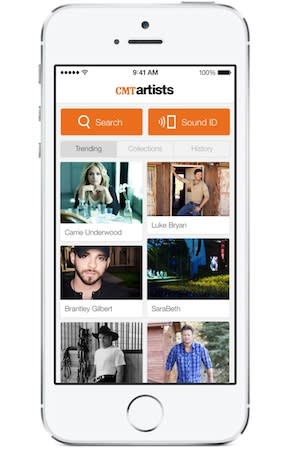 Viacom knows it has to spread the love equally amongst its properties, as any great parent company would do. In this particular scenario, it means releasing a new music discovery app for Country Music Television, just like it did for MTV back in October of last year. With CMT Artists, it's clear that Viacom took a complete cue from MTV's version, offering easy access to in-depth artist pages, exclusive interviews, news and music videos. There are also a number of other useful tidbits, including the ability to easily identify unfamiliar songs, either by typing in lyrics or via the Sound ID feature. Naturally, CMT Artists focuses on country tunes and the musicians behind them, as opposed to the broader approach taken by MTV. And even though the application was designed with the iPhone's screen in mind, there won't be an issue installing it on larger iOS devices if you choose to do so.

Taylor seems pretty excited about it.

In this article: CMT Artists, CMTArtists, Country music, Country Music Television, CountryMusic, iPhone app, mobilepostcross, music, Viacom
All products recommended by Engadget are selected by our editorial team, independent of our parent company. Some of our stories include affiliate links. If you buy something through one of these links, we may earn an affiliate commission.