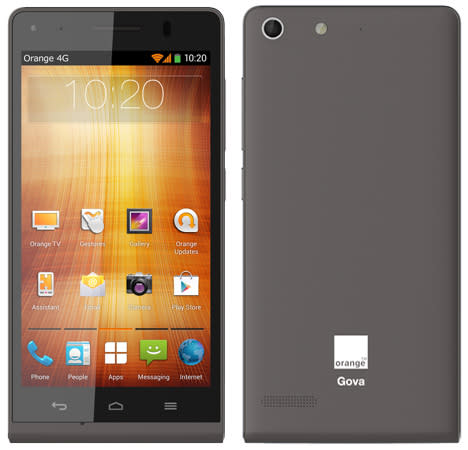 We don't normally think of Orange's smartphones as quick, but we'll have to make an exception for the carrier's just-unveiled Gova. The 4.5-inch, Android 4.3-toting handset is the provider's first with 150Mbps LTE, giving subscribers fast data without making them spring for more advanced hardware. It's also one of Orange's more capable phones overall thanks to its 1.2GHz quad-core processor, 1GB of RAM, 5-megapixel rear camera and 8GB of built-in storage. The Gova should reach Luxembourg, Mauritius, Moldova, Poland, Spain, Slovakia and Tunisia in April. Those that don't need quite so much power can opt for the already available Reyo, which combines more modest data speeds with a 5-inch screen, Android 4.2 and a 1.3GHz dual-core chip. Unfortunately, there's no word of UK launches for either of these frugal devices.

9
In this article: android, gova, jellybean, lte, minipost, mobilepostcross, mobilepostmini, mwc2014, orange, Orange Gova, Orange Reyo, reyo, smartphone
All products recommended by Engadget are selected by our editorial team, independent of our parent company. Some of our stories include affiliate links. If you buy something through one of these links, we may earn an affiliate commission.