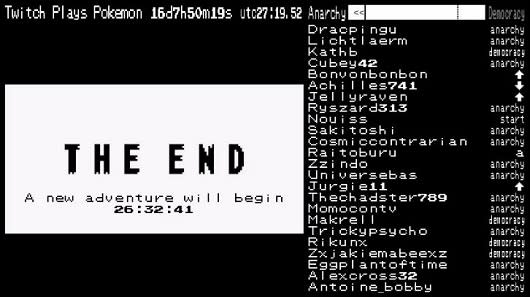 The livestreamed crowd-play event Twitch Plays Pokemon has ended, as thousands of players pooled their efforts to defeat the Elite Four in Pokemon Red. The game was completed after 16 days of consecutive play and saw over 35 million viewers during that time.

Twitch Plays Pokemon is a Pokemon Red mod that allowed Twitch viewers to control the game's main character Red by entering commands in the streaming platform's chat window. The event began on February 12 and reached 75,000 concurrent viewers after five days of play. There were plenty of doubts that players would even be able to cross the Safari Zone in the game, let alone view its ending credits, though the game's creator told Joystiq that "even when played very poorly it is difficult to not make some progress in Pokemon."

The community that gathered around Twitch Plays Pokemon upheld a narrative that extended beyond Pokemon Red's initial scope and included the Twitter-trending Bird Jesus (Pidgeot) and the spiritual consultant and deity Lord Helix (Omanyte). Joystiq also talked with MIT associate professor T.L. Taylor about the event's place in network and game culture, who said it tapped into "something I think is very compelling. So I don't think we're going to see [crowd-play] go away as a genre."

Considering how entertaining this has been, we certainly hope not.

Update: As it turns out, the Twitch Plays Pokemon stream now features a countdown timer ticking away roughly 26 hours and 25 minutes as of this writing that notes, "A new adventure will begin." That pegs the start of what seems to be the next version of Twitch Plays Pokemon at 7:00 a.m. EST Sunday morning.
[Image: The Pokemon Company]
In this article: all-hail-helix, bird-jesus, crowdsourcing, Game-Freak, LiveStream, LiveStreaming, narrative, nintendo, Pokemon, pokemon-red, The-Pokemon-Company, twitch, twitch-plays-pokemon
All products recommended by Engadget are selected by our editorial team, independent of our parent company. Some of our stories include affiliate links. If you buy something through one of these links, we may earn an affiliate commission.