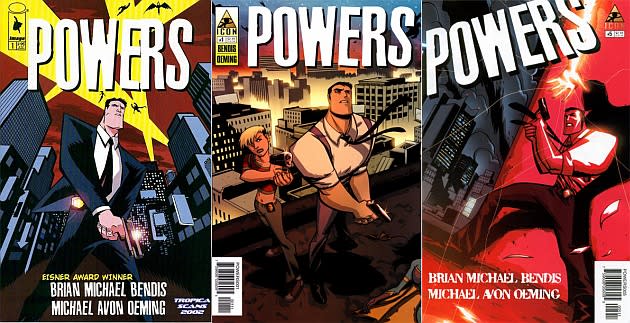 Sony executives have revealed the company's first entry into original content for the PlayStation, a TV show based on the Powers series of comics. Sony Pictures Television is producing the show, made up of ten one-hour episodes focusing on a detective who investigates cases involving people with superhuman abilities. Sony's push for original PlayStation Network-exclusive video content is moving forward alongside its planned internet TV service, and will have competition from Xbox that includes a Steven Spielberg-produced series based on the Halo games. So far, Sony hasn't said if there will be an extra charge to watch the show or if it will be included with the PlayStation Plus package somehow, but its PSN exclusivity only applies in the US -- internationally Sony Pictures will license it to networks just like Breaking Bad or Justified.

The Hollywood Reporter mentions Powers has been under development for FX since 2011 when a pilot starring Jason Patric wasn't picked up, and attempts at adapting the source material for TV or movies have been under way for more than a decade. Unlike Microsoft's Halo project, we know some of the names attached to this show, at least behind the camera. Writer Charlie Huston has been working on the project with series creator Brian Michael Bendis and producers include several names attached to the Circle of Confusion company along with Bendis and co-creator Michael Avon Oeming. In previous videogame generations console exclusives consisted of games and occasionally services, but it looks like Sony and Microsoft's next battleground is the one already occupied by internet video streamers like Netflix, Amazon and Hulu.

Thank you to everyone for your warm wishes on the new Powers television situation. More updates as they happen.

In this article: Brian Bendis, hdpostcross, playstation, playstation network, powers, psn, sony, sony pictures television
All products recommended by Engadget are selected by our editorial team, independent of our parent company. Some of our stories include affiliate links. If you buy something through one of these links, we may earn an affiliate commission.