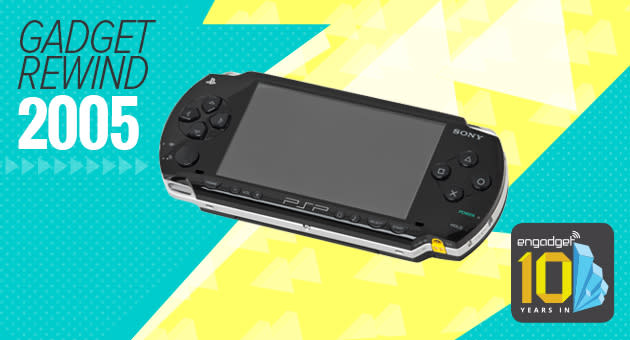 Engadget was lucky enough to get ahold of one before the end of 2004, but the Sony PlayStation Portable (PSP) was officially launched in the US in March 2005. This made picking a portable a difficult decision for impatient consumers who were wavering between the Nintendo DS and the PSP. The DS had already arrived by late 2004 and details about the Sony release were still a bit fuzzy. So, you decided to wait and snag the PSP, and according to the 2004 Engadget Awards, both editors and readers agree that you made the right decision. It offered several options including external storage, a 1.3-megapixel camera add-on and the ability to handle an array of image, audio and even video formats. The PSP also had a high-resolution 480 x 272 LCD and content looked great ... at least as long as the battery held out. The PSP had a rechargeable 1800mAh battery, but all the bells and whistles led to rapid depletion if you used it as a truly portable device.

All those extras packed into the PSP ran the price up well past the competition. The Nintendo DS retailed at around $150, while Sony slapped a $250 price tag onto the PSP. You did have the whole PlayStation franchise behind it, though, with games like Twisted Metal, Wipeout, Metal Gear and plenty more. Although the PSP had a lot going for it, battery life and device size left room for improvement and that's just what Sony did over the next few years. By 2007, the PSP had shed some weight and arrived as the Slim & Lite (PSP-2000) version. After numerous iterations, the PlayStation Vita arrived in 2012, still looking a bit like the original PSP -- and still taxing the battery like the IRS -- but rocking a stunning 960 x 544 OLED display.

Did you own a Sony PSP? Add it to your Engadget profile as a device you had (or still have) and join the discussion to reminisce or share photos of your device with other like-minded gadget fans.

In this article: 10 years in, 10yearsin, av, engadget10th, gadget rewind, gadgetrewind, gear, mobile, nintendo ds, playstation vita, PSP 1st-gen, sony, sony psp
All products recommended by Engadget are selected by our editorial team, independent of our parent company. Some of our stories include affiliate links. If you buy something through one of these links, we may earn an affiliate commission.