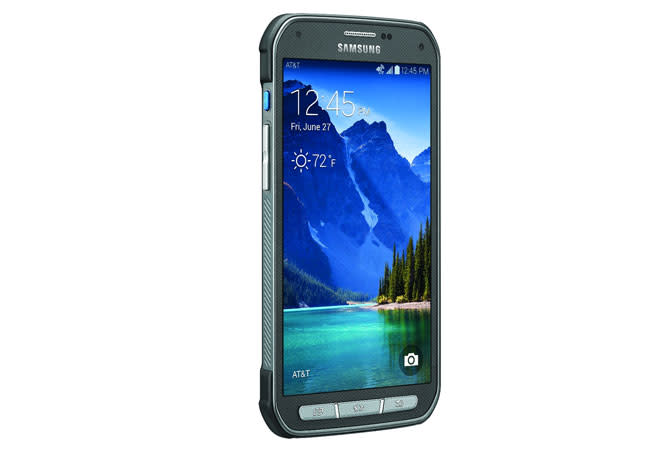 We knew it existed but now it's finally crawled out of some jungle (or beach vacation) to go official. Samsung's Galaxy S5 Active is available today on AT&T and while ruggedized phones typically lack.. something compared to flagship devices, this time it looks like no notable corners were cut. The Galaxy S5 Active has the same full-HD AMOLED 5.1-inch screen, while the 16-megapixel camera and fingerprint sensor are also lodged into the rugged smartphone. That said, water-resistance is now part of the original GS5's bag of tricks, which makes it less of selling point here. Regardless, there's the shock-resistant dust-proof shell and a burlier look: even if it's dreamy rendered view we're seeing here, the metallic details and finish could well win over Galaxy fans that aren't pro-plastic -- we're a little intrigued to see it IRL.

Samsung's also added a "convenience key" on the edge that will boot up all your "outdoor apps" (presumably maps and activity trackers) on a single application screen. If active means fitness to you, you might also be tempted by the offer of a $50 discount on the Gear Fit alongside the purchase of the GS5 Active. The adventure-ready phone will come in Camo Green, Titanium Grey and the not-so-rough sounding Ruby Red colors and will cost $200 on two-year contracts.

In this article: active, att, galaxys5active, gs5, gs5active, mobilepostcross, samsung
All products recommended by Engadget are selected by our editorial team, independent of our parent company. Some of our stories include affiliate links. If you buy something through one of these links, we may earn an affiliate commission.