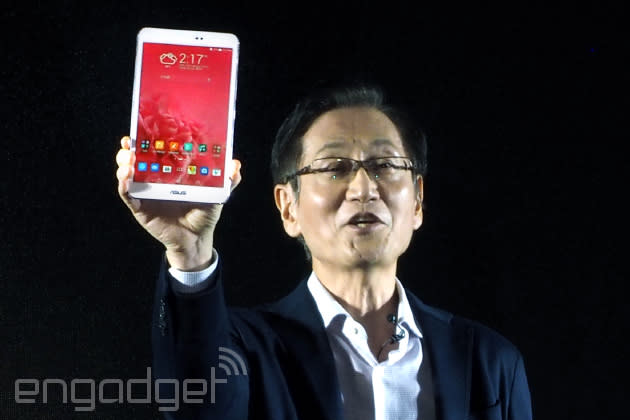 ASUS boss Jonney Shih is barreling through his announcements at Computex 2014. Along with routers, 4K monitors and flagship laptops, he also revealing the company's newest tablets, and the MeMO Pad 8 is the first salvo. With a 64-bit 2.3GHz Intel processor, Gorilla Glass 3 and a full HD display, Shih says it's the lightest LTE tablet in the world -- it's only 299 grams.

It was swiftly followed by the slightly smaller, and logically named, MeMO Pad 7. It'll also pack Intel's 64-bit Atom processor, although the screen is merely HD (that's 720p), not 1080p like the MeMO Pad 8. If you haven't quite bought an Android tablet yet (and you're still in the market for one), the MeMO Pad 8 will arrive later this year in pink, white and royal blue color options, while the MeMO Pad 7 will be dressed in turquoise, red, white and yellow. Summer shades, people. Summer shades.

Both tablets feel light, and while the range of color options is attractive, we can't fight the feeling that there's nothing here to woo over prospective tablet buyers that haven't yet made the leap. Both of them handled exactly like you'd expect from an Android tablet; we have no complaints about the Intel processor working away inside. The MeMO Pad 8 proved to be our favorite of the two, with a bright, pixel-dense panel. The styling of the 8-inch tablet also follows the Padfone series, while the 7-incher settles for looking awfully similar to last year's MeMO Pad, which not-so-coincidentally launched at Computex 2013.

In this article: asus, computex, computex2014, lte, memopad7, memopad8
All products recommended by Engadget are selected by our editorial team, independent of our parent company. Some of our stories include affiliate links. If you buy something through one of these links, we may earn an affiliate commission.