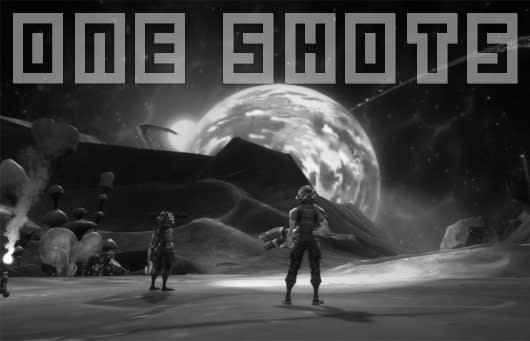 Man, Bunglerm00se is so lost right now, you can't even imagine it. At least he's getting a great view as he contemplates having to trudge back. If you haven't heard, space is, like, really really big. Costco-family-packages-of-goldfish-crackers big.

"WildStar is shaping up to be one of the most immersive, interesting, and (above all) fun MMORPGs I've played in over a decade of mMm-Mor-Pu-Guhing, and I'd recommend it to just about anyone!" Bunglerm00se enthuses. "This is from the first shiphand mission your character can run. In this case, my character was asked to liberate a moonbase from a deadly menace. Is there any other kind of menace, you ask? On and around Nexus, the answer is 'no.' But the scenery sure is pretty."

You know what else is pretty? Everything after the break. Just you wait and see, my friends. When it comes to fighting, I am all for anything underhanded and non-honorable that gives an aggressor an unfair advantage. After all, the whole point is to win, not to make everyone feel good about participating, right? That's what I thought. And that is why I endorse Frank's ambush of an almost unheard-of giant spider in Final Fantasy XIV."

"Here's a chance for a preemptive strike for Axelay and her companions," reader Frank writes. Go for it, Frank. No judgment here! Although I might be judging the character on the right for wearing knickers into combat. Or wearing knickers, period. "Here's Frani, my level 16 Hunter, just outside of Bree. Lord of the Rings Online is still such an amazing game, and it's so great seeing so many players still enjoying all it offers," submits reader JohnD.

I was just thinking the other day how gorgeous this Middle-earth MMO is, especially considering its age. I still screenshot the heck out of it when I'm in-game! We'll wrap up with another gorgeous picture from Star Wars: The Old Republic sent in by reader Cim. This photo illustrates one good technique for taking a dramatic picture: Lower the camera angle to the ground and aim up. That way everything looks epic and heroic from the vantage point of an ant. Our screenshot challenge of the week is (why not) to climb to the highest place you can, and then jump off to your death while you photograph your descent. Amuse me, internet citizens!

Want to be featured in a future edition of One Shots? Send your favorite MMO screenshots to oneshots@massively.com, and don't forget to include your name, the name of the game, and a description of the scene. Large, colorful, UI-free shots that tell a story and really show off the game make for the best images. Look ma, we brought back One Shots!
In this article: bring-back-one-shots, console, consoles, fantasy, ff, ff14, ffxiv, final-fantasy, final-fantasy-14, final-fantasy-xiv, galleries, gallery, lord-of-the-rings-online, lotro, one-shots, pics-or-it-didnt-happen, reader-screenshots, reader-submissions, screenshot, screenshots, square, square-enix, star-wars-the-old-republic, swtor, user-submissions, wildstar
All products recommended by Engadget are selected by our editorial team, independent of our parent company. Some of our stories include affiliate links. If you buy something through one of these links, we may earn an affiliate commission.