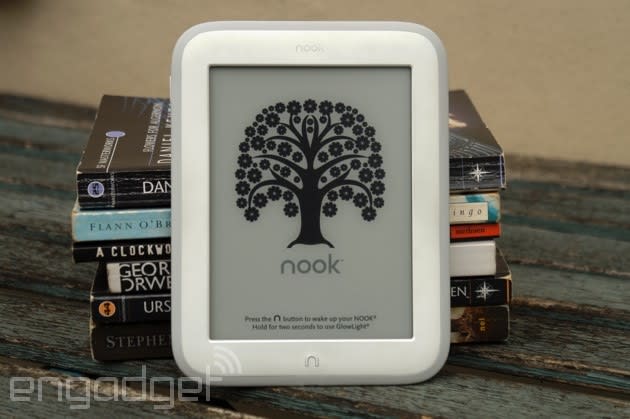 Barnes & Noble isn't exactly a household name in the UK, but in the States it's a book-selling behemoth, with hundreds of stores complimenting a vast library of e-books, as well as a line of readers to consume them on. In autumn 2012, B&N expanded its reach to the UK (if only in website form), challenging the likes of Amazon and Kobo with its Nook range of tablets and e-readers, including the first with a front-lit display. We've seen minimal activity from the company since, but after almost two years without fresh hardware, the new Nook GlowLight launches in the UK today. The second-generation GlowLight e-reader, with significantly improved 6-inch display, is now available for £89 at various retailers including Argos, Currys/PC World, John Lewis, Sainsburys, ASDA and bookshop chain Foyles. While the Nook GlowLight might best its predecessor, Barnes & Noble has suffered for its dormant period. Particularly, the Nook's front-lit display tech hasn't advanced at the same pace as those of its main rivals, the second-generation Kindle Paperwhite and Kobo Aura, despite launching later than both. You can imagine when it went on sale in the US last October sporting the same price tag as the Paperwhite, our full review didn't exactly paint it as an exciting proposition, despite a polished user experience and access to millions of books, magazines and newspapers.

In the UK, the GlowLight is entering the market at roughly £20 less than its closest competitors, which is significant when affordability is a key selling point for all e-readers. As a second-gen Paperwhite owner who's been using the new GlowLight recently, I can't say I would switch to the cheaper device, but also haven't felt like I've been using an inferior product. I've found the speed and touchscreen responsiveness of the GlowLight doesn't quite match that of the Paperwhite, but software- and store-wise, they're easily comparable. Barnes & Noble didn't want its newest e-reader to be a black slab like most others, instead opting for a more rounded design in white, with a grey silicon trim. You can swap that out for other silicon bands in rose or violet (£15 for a pack of two) if grey isn't your colour, too. B&N succeeded in making the Nook GlowLight more playful than the competition, and its lack of sharp edges, soft bumper and light weight made me more inclined to travel with it in my back pocket. (I tend to carry the more fragile-looking Paperwhite around in a case, in a bag.) The problem with it being white, though, is that it's a magnet for mucky fingerprints and worse, dye from jean and trouser pockets (see the gallery for a closer look at the stains I couldn't scrub off).

I still prefer the Paperwhite in most respects, and honestly, I'm too invested in the Amazon ecosystem already to consider moving. How much a person has committed to one platform of another will ultimately have the biggest impact on their purchasing decisions, and the Nook GlowLight turning up so late to the UK can't help. It might not be quite as good as the competition, but the Nook GlowLight still offers a great e-reading experience at a very reasonable price.

In this article: BarnesAndNoble, e book, e books, e reader, e readers, e-book, e-books, e-reader, e-readers, nook, nookglowlight, uk-feature
All products recommended by Engadget are selected by our editorial team, independent of our parent company. Some of our stories include affiliate links. If you buy something through one of these links, we may earn an affiliate commission.