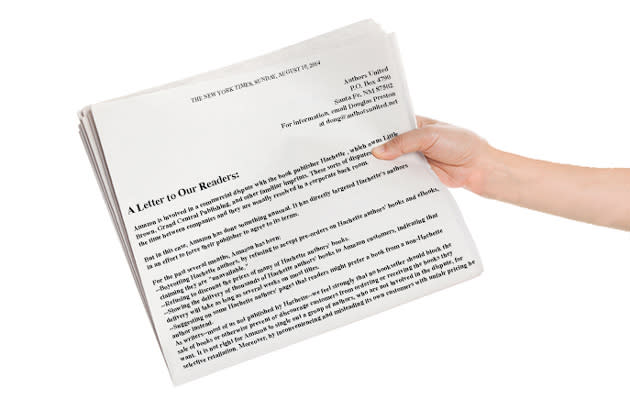 There's no sign that Amazon and Hachette are close to burying their e-book hatchet, which has prompted the authors caught in the middle to speak up. One of those affected, Douglas Preston, penned an open letter to Jeff Bezos, requesting that he stopped singling out individual Hachette authors for "selective retaliation." After it was published, however, nearly a thousand other writers, including Stephen King, Malcolm Gladwell and Jeffrey Deaver co-signed the letter -- which has prompted the group Authors United to pay for the letter to be printed as a full-page advert in Sunday's New York Times. Apparently the Kindle Team's most recent letter fell upon deaf ears.

In this article: amazon, Authors United, Douglas Preston, E-books, Hachette, Jeff Bezos
All products recommended by Engadget are selected by our editorial team, independent of our parent company. Some of our stories include affiliate links. If you buy something through one of these links, we may earn an affiliate commission.