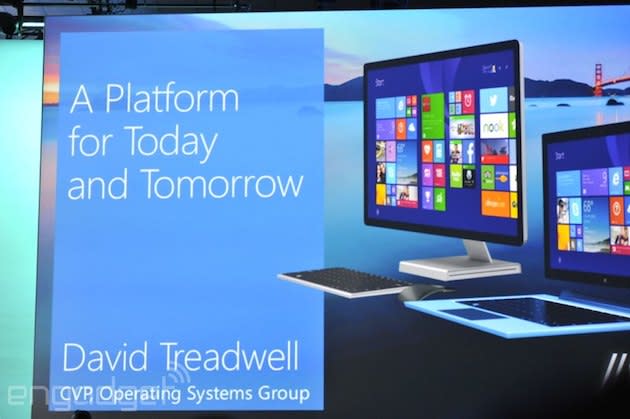 While some people are still getting used to the idea of Windows 8, Microsoft's already working to put the next major iteration of Windows in people's hands. And that could be happening sooner than you think. According to ZDNet's Mary Jo Foley, who has a solid track record on Microsoft-related scoops, the Surface maker is looking to release a "technology preview" of Windows Threshold, aka Windows 9, toward the end of September or the beginning of October. Foley notes that, in an effort to enhance the serviceability of the OS, people who instal the preview will be required to agree to "have subsequently monthly updates" pushed to their computer -- which seems like a small pledge to make in exchange for trying some new software.

As a refresher, Threshold is expected to further unify Microsoft's operating systems, like Windows 8 and Windows Phone 8. The OS will reportedly ship in three modes -- desktop, tablet and smartphone -- and is capable of tailoring the experience to fit whatever device you're using. You'll be able to check it out soon enough, since the "technology preview" of Threshold is said to be coming as a public teaser once it officially arrives.

In this article: Microsoft, TechnologyPreview, Threshold, Windows 9, Windows Threshold, Windows9, WindowsThreshold
All products recommended by Engadget are selected by our editorial team, independent of our parent company. Some of our stories include affiliate links. If you buy something through one of these links, we may earn an affiliate commission.