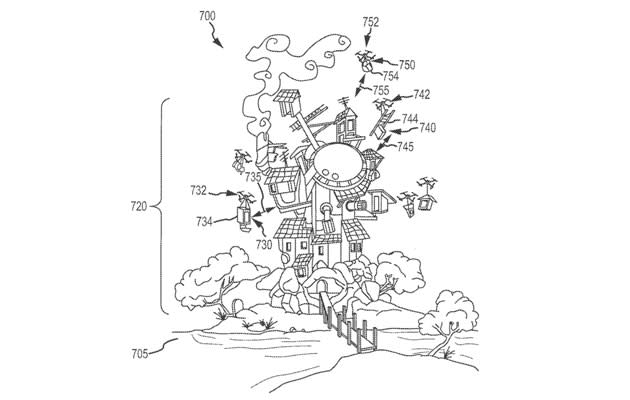 We've seen drones used for all sorts of things from film production to package delivery. Now, it seems Disney may be looking to leverage the aerial vehicles for its theme parks. The company has applied for three patents that employ the remote-controlled gadgets for floating projection displays and airborne marionettes. That latter option is meant to boost hovering parade characters that have been limited to gas-filled balloons with little mobility, while the former uses UAVs to float a screen over park visitors. The third scenario is one where the individual drones each carry a lighting rig to achieve the desired effect. Something like fireflies after dark, we'd surmise. All three projects would be commanded from a "ground control station" to coordinate flight paths. Of course, with this being an application, there's no guarantee that you'll encounter the compact flying vehicles at Disneyland anytime soon, but the outfit's R&D department has a knack for coming up with awesome ideas.

In this article: aerialdisplay, disney, display, drone, drones, parade, themepark
All products recommended by Engadget are selected by our editorial team, independent of our parent company. Some of our stories include affiliate links. If you buy something through one of these links, we may earn an affiliate commission.