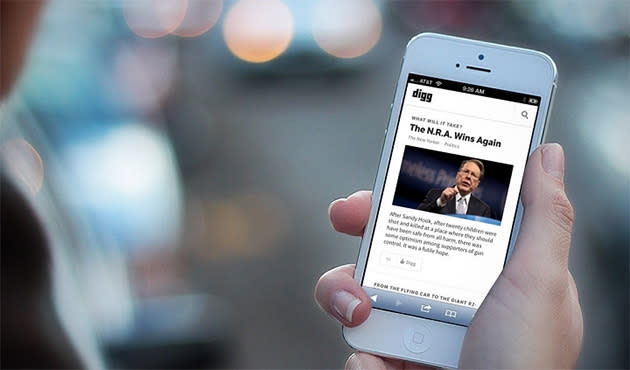 Last month, Digg tried to very subtly reinvent itself with the launch of a feature called Digg Deeper. The concept was simple enough: Deeper would surface stories based on what your Twitter pals were all talking about, so you'd have a better sense of the news of the moment. There was just one caveat, though. You see, at the time, it was only open to members of News.me (the startup the new Digg team slaved away on first). We're down with rewarding loyalty, but now Deeper is expanding in a big way -- the feature has been baked into the Digg Reader proper, and now also lives in an updated version of the Digg iOS app you can download right now. Oh, and the team's launching a new daily digest email that'll encapsulate all your Twitter friends' shared stories and blast them into your inbox (as if it wasn't cluttered enough). Digg's little social experiment seems to have paid off, but the thing to remember is that it's still just a start. After all, there's still no support for social channels beyond Twitter (like a less clickbait-y Facebook, for instance) and no word on when Google's faithful will get a chance to sift through all that new news on their Android devices.

In this article: betaworks, digg, diggdeeper, mobilepostcross, news, social, startup, twitter
All products recommended by Engadget are selected by our editorial team, independent of our parent company. Some of our stories include affiliate links. If you buy something through one of these links, we may earn an affiliate commission.