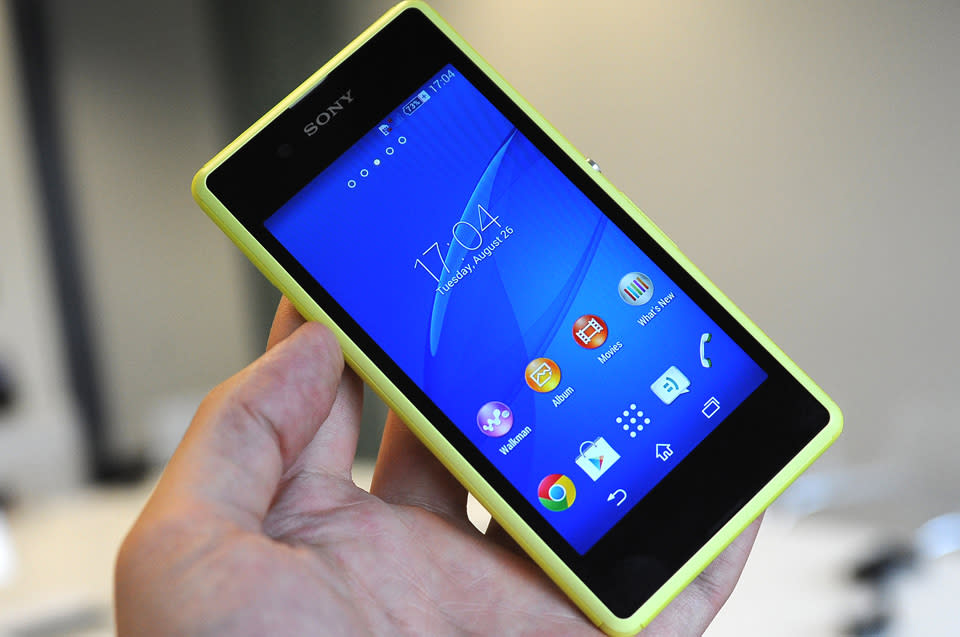 Not everyone needs a smartphone that's as fast (and as expensive) as their laptop, and competition in the affordable handset market is fierce. Never one to miss an opportunity, Sony has announced that it's complementing the top-end Z3 handset and Compact sidekick with the more modestly endowed Xperia E3. Of course, that means compromising -- Sony says the E3 features "flagship design" and 4G capability, but that's where the high-end comparisons end. It carries a modest 4.5-inch (854 x 480) screen, quad-core 1.2GHz Snapdragon 400 CPU, a 2,330mAh battery, 1GB of RAM, 4GB of expandable memory, a 5-megapixel camera and Android 4.4 KitKat. Though the specs aren't exactly inspiring, Sony is emphasizing social and camera features like HDR and Timeshift burst. There's no word on pricing or availability yet, but lets hope the young target market it's aimed at will be able to afford it.

Sony made a risky statement when it claimed the Xperia E3 features a "flagship design," but it's not entirely wrong. The E3 actually looks a lot the new Xperia Z3 Compact, although any sign of premium materials has been replaced with a matte, tactile plastic. It actually doesn't feel like too much of a downgrade, however, thanks to the handset's robust build quality and a design language that's true to Sony's other top-end devices announced at IFA. The E3 is a completely acceptable 8.5mm thick, and a comfortable weight at just under 144g. Although it's not built to quite the same standard as the Z3 series, the new color scheme has also been carried over. Four models will be available, from the standard black and white hues to yellow and copper. It's probably more accurate to say eight models, given there are also dual-SIM variants of the device. The Xperia E3's 854 x 480 display might not be anything to write home about, but at least we have a good friend on the spec sheet in the quad-core Snapdragon 400. It's the go-to chip for affordable phones these days, and unless you're running some seriously performance-intensive applications, it does everything asked of it with vigor. The problem then is: how does the E3 expect to differentiate itself from affordable wunderphones like the LTE version of the Moto G, which has a much better 720p display, more internal storage, and a bargain-bucket price? Undercutting the cost of the Moto would be a great place to start, but we fear that won't be the reality when the E3 launches worldwide this fall. Sony sees the E3 standing out from the crowd because of the brand name it carries, the flagship-esque design, and the experiences it offers via its maker's services and camera apps. We'd argue the price tag is way more important, but we'll have to reserve our judgements until we hear more on cost closer to launch.

In this article: hands-on, ifa, ifa2014, mobilepostcross, sony, sonyxperiae3, xperiae3
All products recommended by Engadget are selected by our editorial team, independent of our parent company. Some of our stories include affiliate links. If you buy something through one of these links, we may earn an affiliate commission.