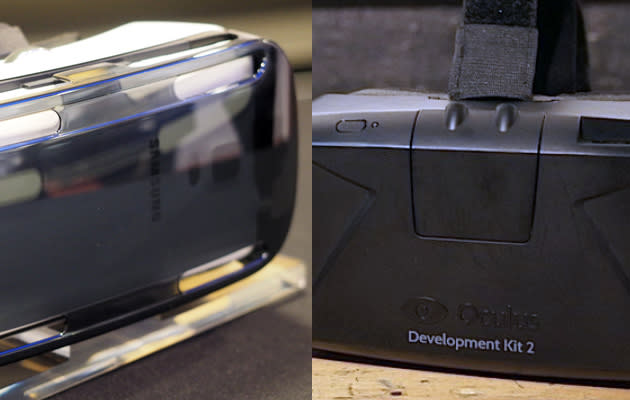 Standing up and moving around with a virtual reality headset is risky. What if you walk into a table? Or step on your dog? Or bash your face into the wall? Standing up and moving around while wearing Samsung and Oculus VR's Gear VR headset isn't suggested. But when you put it on, seated, and turn your whole body around to look behind your virtual self, and no cords get in the way, that's a magical experience. "There are going to be different categories of VR," Oculus VR CEO Brendan Iribe told Engadget in an interview last week at IFA 2014 in Berlin, Germany.

On one side, there's a tethered experience like Oculus Rift, where, "There's going to be this bigger, more expensive experience ... that has a much bigger sense of 'presence' right now all attached to a computer where you have power plugged into the back," he said. That's the concept of being transported to another world and actually being there: a sense of "presence." On the other side, there's mobile VR: untethered, intended for mainstream accessibility and able to use your existing devices (such, as, say, your cellphone). "It's untethered, but there's now limitations and restrictions around the GPU/CPU," Iribe said.

Virtual reality, right now, is all about trade-offs. This discrepancy between mobile and tethered VR is the biggest trade-off there is: Do you want convenience, or do you want "presence"?

If you answered, "I want both," we're right there with you. Sadly, that's not a reality just yet. Iribe explained:

"There are certainly trade-offs. We don't know how long it'll take to get to the magic VR sunglasses that are untethered. It's a dream. We all believe in that future of a mobile, VR pair of sunglasses, but that's pretty far away."

Gear VR is a staging ground for mainstream virtual reality. It uses the Note 4. It's focused on media consumption. It's light and pretty. Heck, when it launches this October alongside the Note 4, everything you can do on it will be free experiences. That's part of the plan of pushing virtual reality into the mainstream. Hook 'em with casual VR, then show off the big guns with tethered, interactive virtual reality. Having spent a lot of time with Oculus VR's second development kit, I was skeptical of the experience being offered with Gear VR. The graphical fidelity is, of course, nowhere near that of a dedicated PC. There's no depth-tracking, so if you move your head forward, the scene remains static. These are major barriers to delivering on "presence," the concept of feeling as though you're physically there while wearing a VR headset. "Presence" is at the core of VR: It's what distinguishes virtual reality headsets from head-mounted displays.

Oculus VR CTO John Carmack agreed, and said that his team is hard at work on taking those next, necessary steps to make mobile VR more capable:

"We are absolutely tackling position tracking, multi-user experiences, better gaming -- all these things -- in the coming year. It's an exciting train we're hitched onto with Samsung here, because their technology ticks twice a year. And that's a treadmill that we've chosen to get on, and we're going to do our very best to stay on that and continue innovating at that pace."

After Gear VR, Carmack expects the competition from other electronics giants will step up tremendously. "This is good enough that it's going to attract competition from the other significant players," he said. And that competition is good for us, the VR users, as it means rapid innovation. Video passthrough on Gear VR is a perfect example: If Oculus' Rift doesn't ship with some form of video passthrough -- what Carmack calls his "Diet Coke button" -- that would be tremendously surprising.

Characteristically, Oculus co-founder Palmer Luckey doesn't see video passthrough as just the ability to interact with reality while wearing a VR headset. He wants more, like augmented reality. "It's one thing to have a convenience window," he told us. "It's another to try and make something where that's a core feature of the device like AR. That's a much harder problem to solve."

Despite the trade-offs, Gear VR offers Oculus a chance to get its name out there on a virtual reality product and to set a foundation for software on the first consumer version of the Rift. The basics -- the dashboard and store UI, for instance -- will be familiar on the Rift. "Our dashboard, the basic interface, platform and store: Expect it to be similar between the two," Carmack said.

It also enables VR developers to start making some money. Beyond just helping push VR into the mainstream, Gear VR enables virtual reality developers to start building a financial foundation for future projects. "The critical thing, from the developer standpoint, is we're actually going to have a market where they can sell and get checks from Oculus with this sooner than on the PC front," Carmack noted. In the long-term, mobile virtual reality and tethered virtual reality won't be separate entities. Carmack foresees a not-so-distant future where the Rift has a dedicated processor that enables both tethered and untethered VR. That's always been the end goal, really. How soon it's coming is up for debate.

"I have my vision for where this goes for Oculus," Carmack said, "Where Oculus starts building systems that might as well include systems-on-a-chip (SOCs), graphics renderers and things inside ours. Not state-of-the-art necessarily, something that will boost the cost all that far up. But then Oculus version three or five or whatever it ends up being is something that can be use unplugged -- we'd have our own Android stuff and all that -- but you could plug it into the PC and use that." An interesting vision of the future indeed. Here's hoping it arrives even sooner than we expect.

In this article: facebook, hdpostcross, mobilepostcross, samsung
All products recommended by Engadget are selected by our editorial team, independent of our parent company. Some of our stories include affiliate links. If you buy something through one of these links, we may earn an affiliate commission.