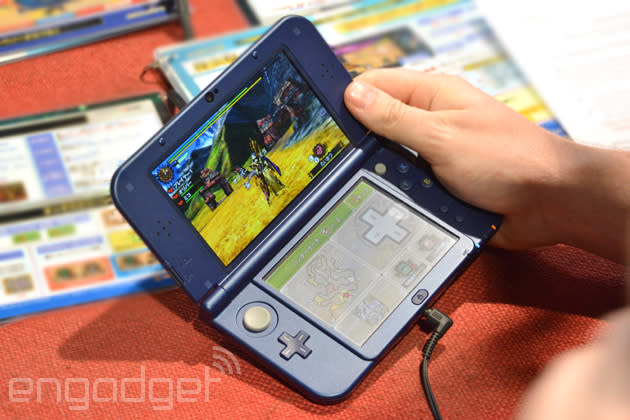 You might have heard: Nintendo's refreshing its 3DS family with two new models. Both the New 3DS as well as the larger New 3DS XL will arrive with a diddly analog stick just above the action buttons. (Throw away your Circle Pad Pros!) Plus, there's built-in NFC for those incoming Nintendo figurines and a new microSD card reader. Unfortunately, in my fly-by Monster Hunter 4G gaming test, I didn't have the chance to try either of those features -- readers love SD slot close-ups -- but it does offer an estimation of what Japanese gamers will get in less than a month when both handhelds launch. There's still no word on an overseas release for either model, but for now, watch me prove how poor I am at Monster Hunter in our video after the break. No, far worse than that. This time, I was handling the big-screened New 3DS LL (That's the Japanese version of the 3DS XL), and if we're honest, there really wasn't much difference from my now-obsolete 3DS XL at home on initial handling: the corners are still curved, making it, once again, far more comfortable than the OG 3DS, while both screens are bright and vivid -- perfect for the palette of Nintendo's gaming... oeuvre. However, there are no games that appropriately make the most of the analog stick (at least, not yet). Here at TGS 2014, with Monster Hunter 4G , the right stick was assigned to camera duties, a role it shared with the d-pad and, er, about a third of the touchscreen too. Understandably, the tiny stick was the better option, as it was easier to access and offered a better degree of control. That's because the new stick has a rubbery finish, while its location means it's easy to nudge a little and then swiftly return to the X, Y, A and B buttons. Then there's those secondary shoulder trigger buttons (which should work nicely with that stick once games arrive): they're a little smaller but they're appropriately spaced enough that you're not going to hit ZR instead of the primary R trigger. It'll be interesting to see how Nintendo handles transitioning between existing 3DS hardware and these new models, which will likely require completely different controller layouts to make those new buttons worthwhile. Both models launch in Japan on October 11th -- and I bravely vow to waste hours and hours on Smash Bros. in the ensuing days to bring you Engadget's official verdict. (You're welcome.)

In this article: 3ds, hands-on, new3ds, new3dsxl, nintendo, tgs2014, video
All products recommended by Engadget are selected by our editorial team, independent of our parent company. Some of our stories include affiliate links. If you buy something through one of these links, we may earn an affiliate commission.