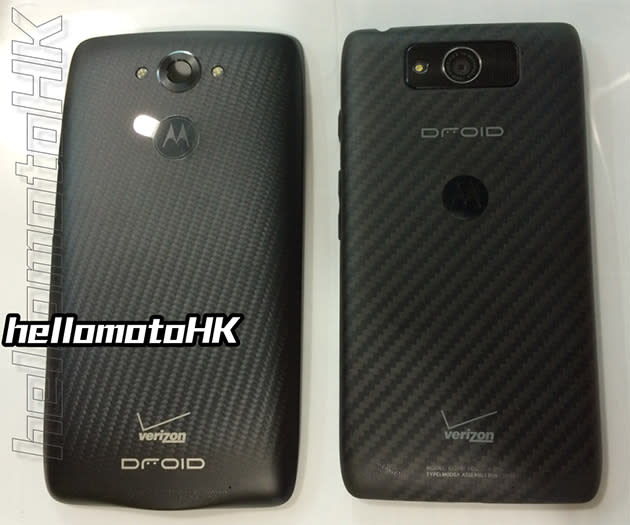 Don't fret, Verizon fans: Motorola's long-running line of Droid devices hasn't petered out just yet. It's hard to miss the swirling rumors of an impending Big Red Moto X launch, but a new image obtained by HelloMotoHK lends a little credence to rumors of another Moto handset barreling down the ol' product pipeline. It's (supposedly) the Droid Turbo, yet another Verizon exclusive... and one that might have an awfully beefy slew of components lodged inside the curvaceous, textured shell you see above. Yes, fine, a spy shot of a phone's back might not get you riled up, but some reports suggest it'll pair a Quad HD display with a 2.65GHz Qualcomm Snapdragon 805 chipset and a 20-megapixel camera. HelloMoto's report doesn't do much to bear out all that speculation, though it does mention that the screen'll be 5.2-inches diagonal and that the Turbo will have a front-facing speaker. For what it's worth, Verizon has been getting in on the teasing lately, too: The official DroidLanding Twitter account cryptically noted that faster battery charging is a "bigger deal" a few weeks back, so we just may be on the cusp of another big announcement.

In this article: android, droid, droidturbo, google, mobilepostcross, moto, motorola, motox, verizon
All products recommended by Engadget are selected by our editorial team, independent of our parent company. Some of our stories include affiliate links. If you buy something through one of these links, we may earn an affiliate commission.