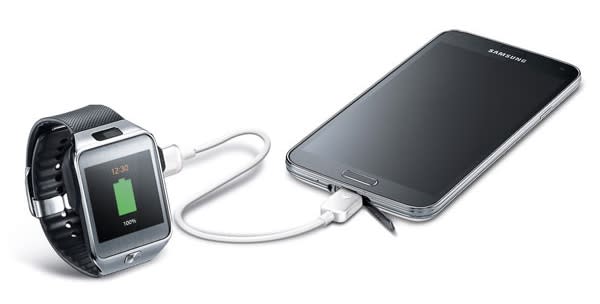 Battery life is one of the most important elements of any mobile device -- it can make or break it, in some cases. And while the majority of Samsung products aren't known to be terrible at that, a little help never hurts. As such, the South Korean outfit recently introduced its Power Sharing Cable, which, as the name suggests, allows you to use it to transmit energy from one Galaxy device to another, like a Galaxy S5 and Galaxy Gear smartwatch, respectively. Better yet though, Samsung's peripheral isn't limited to its own handsets, slates or wearables, with the company claiming that the Power Sharing Cable is friendly with "any device" that can be charged by way of micro-USB. Meanwhile, the companion app lets you select just how much power you're willing to share from the main source, making the process simple to monitor. The Power Sharing Cable is available now for $20, which seems like a small price to pay for something that could be very handy in times of need.