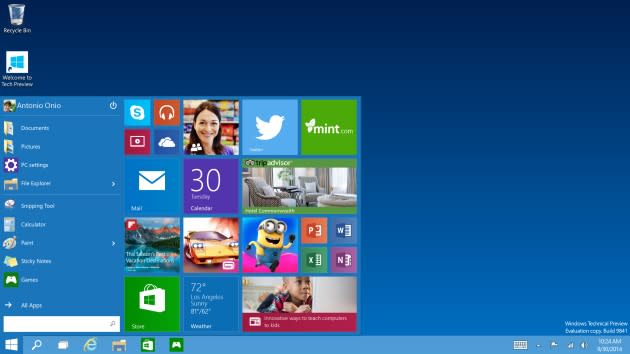 Still confused about why the new version of Windows is 10, instead of 9? Beyond the loosely defined numbering schemes that are all too common in tech (how many iPhones did it take to get to 6?), a note posted to Reddit could provide an answer. Reddit user cranbourne claims to be a Microsoft developer, and cites rumors that early testing with the name "Windows 9" ran into problems with code some third-party developers used as a shortcut to detect when apps are running on Windows 95 or Windows 98. The problem, is that it wasn't written to actually check for the extra character. Whatever the real reason is Microsoft isn't saying, and it gave Gizmodo a vague non-answer about the new name so your conspiracy theory is as good as ours (we think they were avoiding a Tolkien nine rings of power reference, and we have evidence to prove it.)

It sounds bizarre, and other versions of Windows have had different names publicly and internally to avoid such issues (Windows 7 aka Windows 6.1). Still, developers we talked to found the reasoning plausible, and there is some evidence that to support it. Programmer Jeff Atwood points out a similar issue that hit Windows 2000 and certain Pentium processors back in the day, while indie dev Christer Kaitila exposed exactly just how many apps you can find that use the offending code with a simple search. If you have a better idea about the name (please don't say because 7 8 9), then let us know in the comments below.

Microsoft dev here, the internal rumours are that early testing revealed just how many third party products that had code of the form:

and that this was the pragmatic solution to avoid that.

LOL at the "real" reason MSFT went straight to Windows 10! This code is all over the place: https://t.co/mHqYMPDocw) pic.twitter.com/t6UI8XVHCd

The news that Windows 10 may have been named that way because of .StartsWith("Windows 9") checks reminds me of http://t.co/CVArfBVbZj

I bet the real reason it's called Windows 10 is because some enterprise app written 20 years ago checks for "Windows 9x". #imaginethemeeting

In this article: code, microsoft, windows10, windows9, windows95, windows98
All products recommended by Engadget are selected by our editorial team, independent of our parent company. Some of our stories include affiliate links. If you buy something through one of these links, we may earn an affiliate commission.