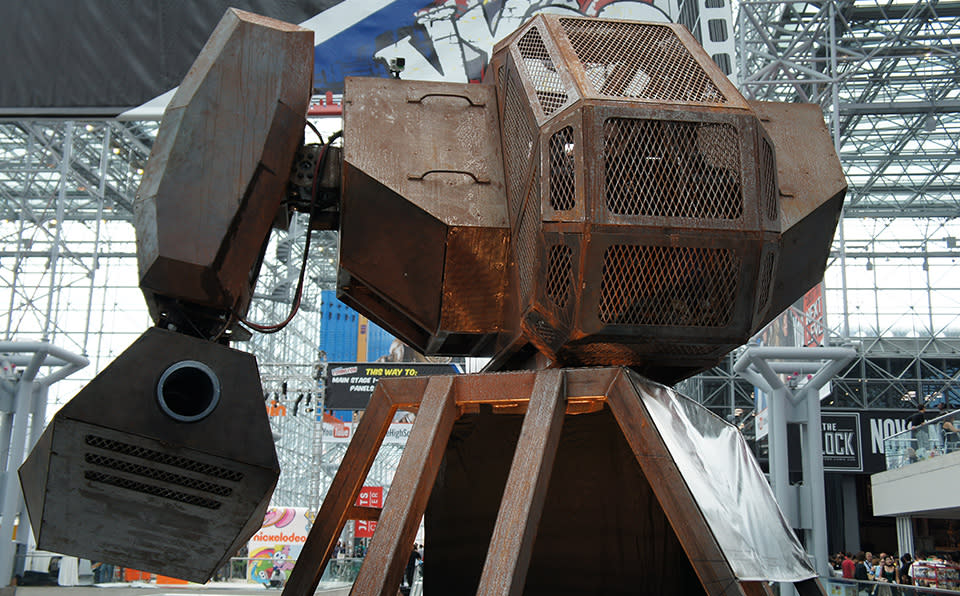 Walk around New York Comic Con and you'll see plenty of celebrities of the nerd world and more cosplay than is comfortable. You might not see too many robots, however. Thankfully MegaBots makes up for what previous years have lacked. Just outside the main exhibition hall on the third floor of the Jacob Javits Center looms the MegaBot Mark I -- a 15-foot, 15,000-pound beast that looks every bit ready for war. The president won't be airdropping the Mark I into Iraq anytime soon, but creators Andrew Stroup, Matt Oehrlein and Gui Cavalcanti intend to pit it against other over-sized mechanized creations in battle. Unlike Gui's previous giant robot project, the car-crushing hexabot Stompy, the Mark I will be almost humanoid. Eventually it'll have arms, legs and a central body that's home to a two seat cockpit. Right now, though, it's just a torso with a right arm, but no legs. The final version will walk, and, instead of hands, have two weaponized arms capable of firing paint-filled foam shells. The chassis itself will also be covered in foam, but not for the protection of the pilots or spectators. Instead, it will shed the those pieces of its body as it absorbs damage from the non-lethal ammo flying its way. If Stroup, Cavalcanti and Oehrlein have their way, entire body parts, like the arm may fly off if enough hits are taken. (Lets just ignore the danger involved in hundred of pounds of metal dropping 15 feet to the floor.) Even if they don't get crushed by their mechs, the human pilots won't go unscathed. The cockpit is covered with a metal grate, instead of a solid surface like Plexiglas, specifically to allow paint through when a shell hits, splattering the pilot.

Sadly, the prototype shown at New York Comic Con isn't battle-ready just yet (we asked if we could take it out and fire at rush hour traffic, but were roundly rebuffed). Right now, the Mark I's only opponent is a special turret armed with a 20-pack pneumatic missile launcher, but the intention is to have at least two robots that can duke it out in a traveling giant robot combat league. To make this happen, MegaBots is launching a Kickstarter at the end of October.

Correction: A previous version of this article neglected to include Matt Oehrlein as part of the Megabots team and incorrectly identified Andrew Stroup as contributing to the Stompy project.

In this article: Andrew Stroup, giant robot, Gui Cavalcanti, MegaBots, NYCC, NYCC2014, robot
All products recommended by Engadget are selected by our editorial team, independent of our parent company. Some of our stories include affiliate links. If you buy something through one of these links, we may earn an affiliate commission.