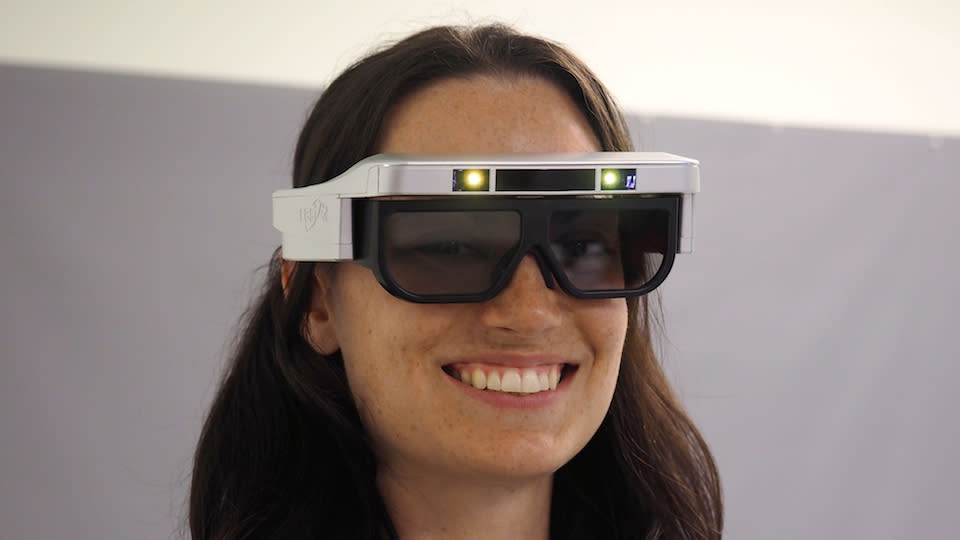 Though she was born in Georgia, the former Valve engineer and all-around hardware guru was raised in Oregon and has always called the Pacific Northwest her home. Even during the seven or so years when she would travel regularly to Silicon Valley as a computer chip consultant, her base of operations never deviated. Now, however, it will. Technical Illusions, the company that she founded with fellow former Valve co-worker Rick Johnson to create a projected augmented reality system called castAR, is uprooting from Seattle and moving to Mountain View, California. And she -- along with the rest of the company's 10 or so employees -- is following suit. No, the company wasn't bought out by Google or anything like that. It is, however, about to take the next steps in growing castAR, which has raised over $1 million on Kickstarter and is currently ramping up efforts to meet production demands. And in order to do that, it needs more people. Specifically, it needs more hardware people.

"The idea for moving down here is to raise more money and to get more hardware engineers," said David Henkel-Wallace, Technical Illusion's newly appointed CEO. Henkel-Wallace is based in California, and has been helping Ellsworth and her crew raise capital for the past few months. "Seattle is great for software folks; not so much hardware."

Henkel-Wallace introduced himself to me in the company's new makeshift headquarters, tucked inside a rented office suite in downtown Mountain View. The space is small and a touch claustrophobic, with narrow hallways, stark empty walls and harsh fluorescent lighting. The only employees on-hand to greet me were Henkel-Wallace, a couple of engineers and Christina Engel, Technical Illusion's communications manager, who's pictured in the photo above. The office, Henkel-Wallace told me, is temporary. They're still looking for a more permanent solution, but they wanted a space to interview applicants, talk to investors and, of course, demonstrate castAR. Which also happens to be the reason I was there in the first place. The team had finally finished building the first few castAR units that it hopes to ship out to its early Kickstarter backers, and I was there to see how it looked. Before I get into that, however, here's a brief recap on how castAR works. It consists of a pair of active shutter glasses that are equipped with a couple of tiny projectors and a camera module perched above the frame. When hooked up to a computer, the projectors cast 3D images onto a retroreflective surface, while the camera module scans for infrared LEDs to track the location and movement of your head. Unlike pure VR systems like the Oculus Rift, castAR touts augmented reality -- the fact that you can play 3D games and still look at the people and things around you -- as its strength. We should note here that castAR also comes with an optional clip-on attachment that can transform the glasses into a VR headset if you so desire.

While it's not quite close to production-quality just yet, the early developer glasses Henkel-Wallace showed me are far and away cleaner and more refined compared to the units I saw seven months ago at GDC 2014. The projectors, camera modules and surrounding circuitry are now encased in a slim plastic enclosure that wraps around the top and sides of the frames, with none of the hot glue and exposed wires that plagued the earlier prototypes. Among the reasons for the streamlined look are new projectors, which have been custom-designed for castAR by a Japanese company that specializes in optics. "They're very similar to low-power pico projectors," said Henkel-Wallace.

"Before, I was building the projectors myself, and putting my fingers all over the lenses, so it was so blurry," explained Ellsworth, who joined us over Skype. She was still in the process of making the rest of the hundred or so pre-ordered glasses, and won't make the trip down south until that's squared away. "I'm not an optical engineer, so we hired a company to build and design the optics for us. Now they're so much better." And they certainly were. From just a brief hands-on with the new hardware, I could tell the images were brighter and crisper. I saw a demo of a fantasy chess game, and I could make out the cracks on the armor of one of the pieces. The clearest example for the sharper resolution was in a new Marble Madness-type game that Johnson and his team designed using the Unity engine. With a resolution of 2,560 by 720, the text for the scores looked nice and sharp, and as the ball rolled around collecting coins, I could easily make out the number of points hovering above it. A retroreflective surface blanketed almost the entire table as well as a couple of the walls in the room, and since it acted as the game's "display," the game terrain was much wider than I anticipated. I found it fascinating that I could look around objects by just walking around the table. Henkel-Wallace mentioned a potential for a holodeck application by blanketing a room with that retroreflective material, and I could certainly see a use case for that.

Early Kickstarter backers will get a copy of the new glasses, a set of retroreflective material, the aforementioned marble game (named mARbles) and an SDK that developers can use to make their own apps and games.

The glasses are also overall much lighter, weighing in at around 135 grams, which Ellsworth hopes to reduce to about 80 grams in the final production. Indeed, the team accidentally made their plastic enclosures much bigger than the internal components -- they didn't know the new projectors and cameras would be so much smaller -- so slimming down the glasses won't be a problem. And that's not all. Backers who also chipped in for peripherals like wands will get them as soon as they're available. The wands, just like the glasses, need a camera to find their way around, and the team is still iterating the design on it. "We're not happy with the buttons just yet," said Henkel-Wallace. "We're trying to put in a more traditional one with a joystick and a button." He added that since it's augmented reality, the wand can be anything you like, say a sword or a gun. If you pair that with retroreflective clothing, Henkel-Wallace said that could lead to all kinds of interesting gameplay. "Imagine slicing someone with a virtual sword and seeing their 'guts' spill out, or maybe shooting someone in a game of laser tag." Ellsworth and Johnson also mentioned they'll be sending out RFID mats so that you could play tabletop games like Dungeons & Dragons with "living" character pieces that can do things like breathe fire or swing an axe.

Henkel-Wallace added that castAR is not just for gaming either. Indeed, one of the reasons the team committed to moving down to Mountain View is that they see its potential far beyond the video game realm. He said that someone from the movie industry has approached him about doing that aforementioned holodeck application, for example, and you could also use it for CAD drawings or work presentations. "One of my objectives is to get rid of this thing," he said, while tapping on the whiteboard behind him. "We can have a three-dimensional experience for projects and presentations."

As for future plans, well, Henkel-Wallace eventually wants a retail space for castAR. "We want people to come and get demos, buy glasses if they want to," he said. "I think we're going to sell a lot of these."

"I'm so excited making the move down there, although it's going to be a tremendous amount of work," said Ellsworth. The biggest logistical problem? Moving down her collection of 80-plus pinball machines. "I'm trying to encourage David to do a big fundraising round so that we can put most of my machines in the office," she said jokingly. "We'll have a pinball parlor."

In this article: augmentedreality, castAR, jeriellsworth, technicalillusions, virtualreality
All products recommended by Engadget are selected by our editorial team, independent of our parent company. Some of our stories include affiliate links. If you buy something through one of these links, we may earn an affiliate commission.