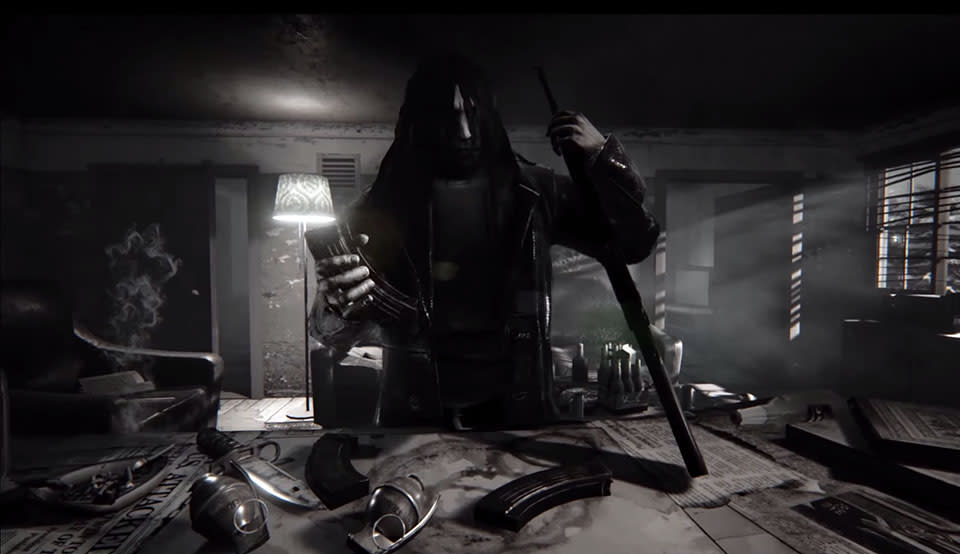 This week, a game about a genocidal maniac was announced. There's a video trailer for the game that depicts ultraviolent bedlam: a murder spree of innocent victims, many begging for their lives. So it's basically another week in video games, then? Not quite.

Okay, okay -- let's rewind and unpack. An unknown development studio from Poland (Destructive Creations) released an announcement trailer (with extremely violent gameplay and sociopathic dialog) for its upcoming PC game, Hatred. The video's around 90 seconds long and, if you're like me, you'll likely find it difficult to sit through. Before the very, very angry main character begins his murder spree, he declares, "My genocide crusade begins here." He's a tall, muscular, white guy with long black hair -- he sort of looks like Glenn Danzig -- and he's about to kill a lot of people. But isn't that what you do in loads of other games? Yes! But also no.

This is not a piece about Hatred (the game). What we've seen of it thus far is a single trailer (above) that's by most standards offensive and, more importantly, bland looking. I want to address the difference between Hatred's brand of violence and, say, Grand Theft Auto's.

In both games, you're given free rein to murder innocent civilians. I've personally spent many hours careening down the sidewalks of Liberty City, or Vice City, or San Andreas, mowing down pedestrians to accrue police stars and play the game of "survive as a mass murderer." It's a game that Grand Theft Auto's worlds allow -- even enable -- but it's not "the point." And it certainly feels a lot different than what Hatred's trailer portrays. But why? And does "the point" matter when you're acting virtually sociopathic?

THE THIN VEIL OF HYPOCRISY

There are loads of ultraviolent games. Remember Manhunt? How about Gears of War: Judgment? Adrian Chmielarz helped create that one, as well as critically acclaimed Bulletstorm. Chmielarz was creative director overseeing both titles, and he's been the guy on the receiving end of flak for his violent game. He likens his work to a form of catharsis. "Stories –- told by books, movies or experiences through video games -– allow for catharsis that satisfies our primal side without any discernible harm to anyone," Chmielarz told me via email this week. He's a longtime game developer with some seriously gruesome work on his resume, including the just-released The Vanishing of Ethan Carter.

"Some creators achieve that [catharsis] through empathy, but in video games we mostly achieve that through hypocrisy," he said. "You kill, torture, dominate, humiliate and sin without consequences, but game designers always offer a thin veil of an excuse." He offered up Bulletstorm as an example, a game where "you are rewarded for creative kills." The "excuse" in Bulletstorm? Enemies are "clearly evil, bloodthirsty thugs, the worst scum in the known universe," and the kills are cartoonish. "You impale enemies on gargantuan cacti with a super-kick, for example. Reasonably hard to confuse that with real life."

It is reasonably hard to confuse that with real life, but it also remains a "thin veil of an excuse" -- you are still murdering, like, thousands of dudes in Bulletstorm. And that's why I'm having a hard time being outright offended at Hatred's trailer, despite feeling pretty thoroughly offended. The wrapping is certainly intended to stir emotion: a soliloquy to hatred and violence by a man arming himself to the teeth, followed by a spree of extreme violence perpetrated on people screaming for mercy. His goal -- your goal, as the player -- is annihilation. No, "Those are the bad guys! Get them before they get you!" Just genocide.

As Chmielarz put it, Hatred (at least that trailer) doesn't allow me to be the hypocrite I want to be.

GTA says, "You're a criminal fighting for your life, so it's okay to murder those people." Uncharted says, "Those bad guys are trying to kill you. Kill them first!" Call of Duty says, "Those guys are terrorists trying to destroy the world! Stop them!" They allow me to pretend that my mass-murdering isn't cold-blooded. And that's a good thing!

"A hypocrite knows right from wrong; they know they sin when they sin," Chmielarz said. "They find excuses for these sins just like we find excuses to mow down another hundred enemies in a video game. And even though they don't follow it, deep down they know which way the moral compass is pointing. Hatred takes the excuses away from us and asks us to enjoy the sin out there in the open."

HATRED FOCUSES ON VIOLENCE AND MURDER AS THE POINT. IN MOST VIOLENT GAMES, MURDER IS THE MEANS, NOT THE OBJECTIVE.

Hatred's development studio Destructive Creations is led by CEO Jaroslaw Zielinski. He told me in an email interview this week why he thinks people are finding offense with the announcement trailer. He said the following when I asked why myself and others have a hard time watching it:

While he's right about the "no mercy for anyone" bit, I don't think the extreme violence is actually what I'm having a hard time with (though I can't speak for others). For me, it's context. Without the (admittedly thin) excuse of being in a virtual war, or being a virtual assassin, or whatever else, I find senseless virtual killing to be...well, senseless. And if anything, I find it pretty reprehensible. Which, yes, I realize makes me a hypocrite. I'm okay with that.

From what the trailer for Hatred shows, the game isn't making a statement about violent games. It's not saying, "We've removed your thin excuse to show you what you're really doing in these games." It's violence for violence's sake. Zielinski explained what Hatred's trying to convey as follows:

"By the game? That we should not bend under political correctness propaganda which we can see everywhere right now. We live in the free world, with freedom of speech and artistic expression and we should use it in any way we want, otherwise we'll be falling under SJWs [Social Justice Warriors] regime. Some reactions for this trailer are a great example of this. Fortunately there are many people who understand us and are standing on our side."

Hatred may be intended as an expression of free speech in its most potentially offensive form, and I'm certainly not calling for it to be censored. As someone who supports social justice, I think the statement about "SJWs" is ridiculous, but that's a whole other conversation. What doesn't square here is the fantasy aspect: There's nothing to excuse away the violence in Hatred. I can get behind people (myself included) virtually killing other virtual beings as long as there's some remnant of an excuse. Hatred strips that, which both makes me not want to play it and worries me about those who do. Chmielarz puts it as such:

"Hatred takes the excuses away from us and asks us to enjoy the sin out there in the open. We will not do it.

A request to bare our animal souls in front of ourselves is a step too far. The fact we cannot do it is a gift, one that allows us the realization that we're not as corrupt and empty as we subconsciously feared we were. And thus a lot of people will not buy and play Hatred, feeling disgust just looking at the game's title. However, and I guess that is the key here, I don't think it is Hatred we really despise.

It's the realization that we are surrounded by people who do not have enough basic decency to be hypocrites. People who have no moral compass, no empathy, who refuse to acknowledge that no, it's not 'just a game.' With their cold realism, motion-captured animations and hair-raising screams, the creators of Hatred go all the way to make sure it's not just a game, but an experience.

We don't want to acknowledge the ugly truth that there are people out there whose idea of fun is to press the shotgun barrel against the face of a terrified woman –- and pull the trigger."

In this article: adrianchmielarz, destructivecreations, hatred, hdpostcross, video, violence
All products recommended by Engadget are selected by our editorial team, independent of our parent company. Some of our stories include affiliate links. If you buy something through one of these links, we may earn an affiliate commission.