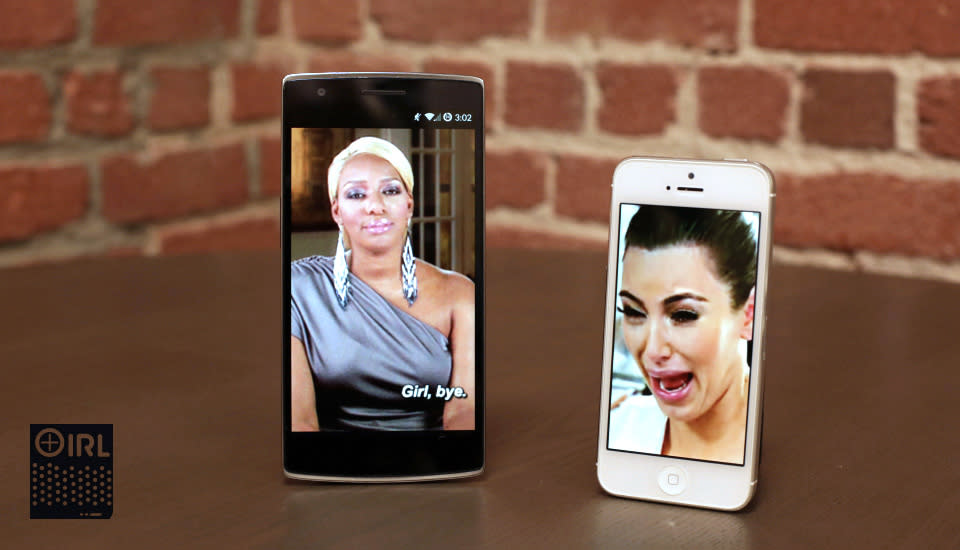 After last month's iPhone event, I was disappointed -- I realized the iPhone 6 and its "Plus" sibling were still catching up to Android in a lot of ways. Regardless, the devoted iPhone fan in me still pre-ordered an iPhone 6 a few days later, in the wee hours of September 12th. The next morning, I awoke to the alarm on my iPhone 5s and went to silence it, only to discover a small spot of water damage had worsened overnight, rendering the phone unusable. With less than 24 hours before jetting off on a work trip, I had no choice but to force myself into using another phone sitting on my desk: the OnePlus One. Now, you might be thinking that this was unusually convenient. The truth is, I decided to get a second phone a couple of weeks earlier and wanted one of the unlocked Android variety. Might as well ensure it's a good phone too, so with an Engadget score of 90, the One made sense. When the One first arrived, I spent a few hours a week playing with it, but since it would be a secondary device, I never thought of it as an iPhone replacement. I clung to the iOS ecosystem primarily because of my 200GB iTunes collection and a plethora of apps I was comfortable with.

In any case, September 12th was a busy workday, so I had little time to prepare the One for full-time use. I did what I could before tackling another hectic day at Engadget. It wasn't until the next morning, on a four-plus-hour flight to Atlanta, while playing with the phone more intensely than ever before, that I had an epiphany. I made a mistake in ordering the iPhone 6 when I had an excellent phone around me all along. Once I got to my hotel room, I canceled my iPhone 6 preorder.

Getting to know Android

Friends of mine who use Android full-time tend to like it, and can't see themselves going back to iOS (if they ever used it in the first place), but they also seem to take a while getting accustomed to it if they've been living the Apple life. I own a Samsung Galaxy Tab 2, which I bought in 2012 and used maybe... five times? It just didn't click for me -- but I couldn't really tell you why.

I made a mistake in ordering the iPhone 6 when I had an excellent phone around me all along.

Maybe it was the tablet itself, but I've played with many other Android devices. A big difference between the One and your usual Android handset is a lack of bloatware, like what's on my dad's Samsung Galaxy S4 from Verizon. (He complained that "ISIS" was on his phone!) There's a lot you can tweak on this phone to your preferences, thanks to the CyanogenMod firmware that's included out of the box (which goes beyond stock Android in terms of offering customization options).

I installed every Android app that I previously ran on my iPhone and spent time throughout my travels customizing the home screen just how I wanted -- a nice perk over iOS. For the most part, each app felt the same as it did on my iPhone, with a few quirks that made it better or in some cases a bit more challenging (but eventually got the hang of it). I didn't come across an app I used on iOS that I couldn't find on Android, though one downside is that many brand-new apps, like Jawbone Drop, launch on iOS and only later come to Android.

I dove into the settings and found so much more control than I ever thought I could have over a phone -- even more than on a normal Android handset, thanks to CM. For example, I could change the way the One's capacitive buttons work and opt for an on-screen bar that's customizable instead. The status bar could show the clock and battery percentage how I'd like. I could decide which shortcuts appeared on the lock screen and... so much more. It felt like every menu had another submenu, which leads to yet another submenu, with more things to adjust however I wanted (or didn't even know I wanted).

There's a lot you can tweak on this phone to your preferences, thanks to the CyanogenMod firmware that's included out of the box.

Notifications also feel less intrusive on Android. Constant pop-ups and banners (some of which made the phone wake up) used to bother me on iOS. On Android, when a new notification appears, the status bar flashes quickly and doesn't interrupt what I'm working on, as opposed to the way an iOS "banner" is more of an interruption. But, should I get the itch for intrusive notifications again, there's a trove of apps I could download to do just that.

Managing my photo and music library was something I worried about with Android, but it turned out to be for naught. On the music side, I used Google Play's own Music Manager app to take all my songs and playlists from iTunes and bring them right into the One with ease. On the photo side, I realized it was easier to access my library of photos stored on Google Drive, and that I didn't need to download the photos onto the phone's local storage, which saved me some valuable space. I have the 64GB version that came with a sandstone backing and it felt great to the touch right out of the box. Wanting to add some flair to the industrial design, I swapped the backing out for a bamboo-style one that adds even more elegance. Its Gorilla Glass 3 screen is durable and it's hugged by a strong body, both of which held up well when I dropped it. It's not waterproof like the Sony Xperia Z3, but it can stand up to a little moisture, like when I use a wringed-out Clorox wipe to remove bacteria. (Thanks, OCD.)

And now, a little more on that screen. It's a healthy 5.5 inches with 1080p resolution. It makes a big difference, especially when playing Kim Kardashian: Hollywood, as I have more room to take in all of the D-list experiences that Kim's bestowing on me. I also found the difference in pixel density between the iPhone 5s Retina display and the 401 ppi OnePlus One to be indistinguishable. (Of course, that's before the unfortunate "incident" I told you about earlier.)

Battery life is another revelation. I get about 10 hours on a charge, though our own Brad Molen got 14 during his review. With the iPhone, I was accustomed to having a portable charger on hand at all times, whereas with the One, I can stay unplugged for a whole workday and do just fine.

Gallery: Strolling through Atlanta with the OnePlus One | 12 Photos

I really hate schlepping around a bunch of devices and, in fact, haven't carried a separate digital camera around in years. On the One, 13 megapixels is certainly better than the iPhone's 8MP, but we know by now that pixel count isn't everything. Having a big screen to see what you're shooting also makes a big difference. Additionally, the built-in camera app from CyanogenMod helps turn the One into a true digital camera superpower.

One downside to the OnePlus One's camera is processing speed -- it seems a bit slower than the iPhone 5s when I go to snap a pic. As Brad experienced in his review, low light isn't really a strong suit here either, but some post-production cleanup can certainly help. Regardless, the phone takes some great pictures. I've included a few samples in the gallery above and on Flickr. To me, the elusiveness of the OnePlus One makes it feel all the more special, like being invited to an exclusive club. That's because you do have to get invited to the club, either via a friend who has an invite or by keeping an eye out for periods of open ordering or contests on OnePlus' forums and social media channels.

For me, it was the right decision to part ways with my past iPhone life.

If you do get an invite, know that there are two versions: a $299 16GB one with a white backing and a $349 64GB sandstone-backed version (like mine). They come unlocked and ready to go, assuming you use a GSM/EDGE carrier like AT&T or T-Mobile. (The phone won't work with CDMA carriers like Verizon or Sprint.)

For me, it was the right decision to part ways with my past iPhone life. The One's built-in CyanogenMod, coupled with a great-looking piece of hardware and my newfound understanding of Android, just fits like a glove now. I couldn't tell you why this "epiphany" didn't happen sooner, but what matters is that it did happen and now my eyes are open to a whole new world.

In this article: atlanta, cyanogenmod, engadgetirl, feature, georgia aquarium, irl, kim kardashian, mobilepostcross, nene leakes, one plus, oneplus, oneplus one, oneplusone, uk-feature
All products recommended by Engadget are selected by our editorial team, independent of our parent company. Some of our stories include affiliate links. If you buy something through one of these links, we may earn an affiliate commission.