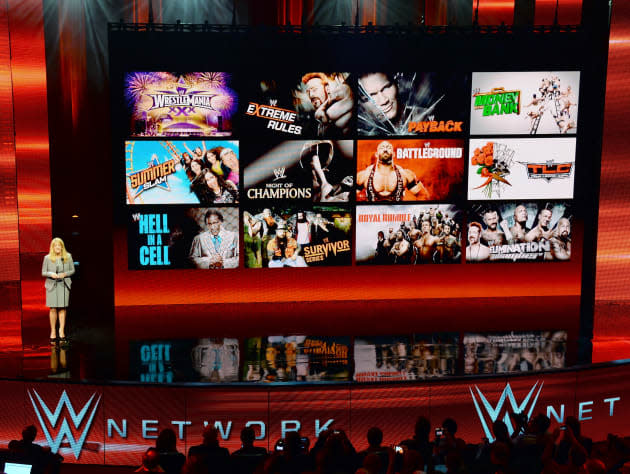 While wrestling fans in 170 countries have been able to enjoy WWE's standalone streaming service for a number of months, UK addicts have been waiting to be tagged in. The launch of the WWE Network was reportedly delayed due to discussions over TV rights, but those issues have presumably been settled, allowing Brits to get in on the action from 8pm tonight. Users will be able to stream on the web, iOS and Android for free this month, with support for Apple TV, Roku, Amazon Fire TV, Xbox One and Xbox 360 arriving on November 18th. Once the trial is up, you'll be charged $9.99 (£6.25) per month -- the same amount as US members, suggesting the company will let your bank work out what you pay using the current exchange rate.

Update: WWE Network has hit another roadblock in the UK. The company didn't explain why the launch was pushed back and refrained from giving a new timeframe for its premiere. Sorry wrestling fans, it seems you'll just have to wait a little longer.

The launch of WWE Network in the U.K. has been delayed until further notice.

In this article: hdpostcross, rko, uk-feature, Wrestling, WWE, wwe network
All products recommended by Engadget are selected by our editorial team, independent of our parent company. Some of our stories include affiliate links. If you buy something through one of these links, we may earn an affiliate commission.