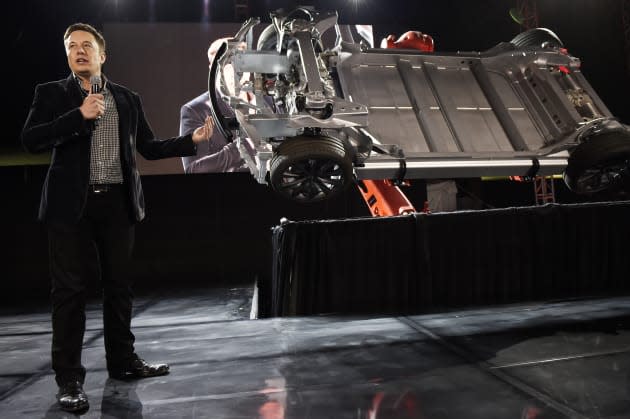 This weekend the Wall Street Journal published rumors linking everyman billionaire Elon Musk to an internet-via-satellite project and tonight he addressed those rumors. In a tweet Musk said his company SpaceX is "in the early stages of developing advanced micro-satellites operating in large formations." We'll have to wait for more details though, as he said an announcement is a couple of months away. The rumors suggest Musk is working with Greg Wyler, formerly of Google / O3b Networks, to launch a total of 700 satellites. The difference between their satellites and others in use would be the size of the fleet -- 10x the size of the largest currently in orbit -- and the size of the satellites, which would be much smaller than those currently used for communications. If it all comes together, expect to see states bidding (again) for the right to build Musk's next big thing, and takes on competition from Google (with satellites and balloons) and Facebook (drones) to extend the internet's reach from above.

Update: In follow up tweets, Musk said the drones could provide "unfettered" internet, at very low cost, and that several points in the initial WSJ report were wrong.

SpaceX is still in the early stages of developing advanced micro-satellites operating in large formations. Announcement in 2 to 3 months.

@RolfeWinkler No, WSJ was wrong on several important points. The article shouldn't have been written on rumor and hearsay.

In this article: elonmusk, fleet, gregwyler, internet, launch, microsatellites, satellite, spacex
All products recommended by Engadget are selected by our editorial team, independent of our parent company. Some of our stories include affiliate links. If you buy something through one of these links, we may earn an affiliate commission.