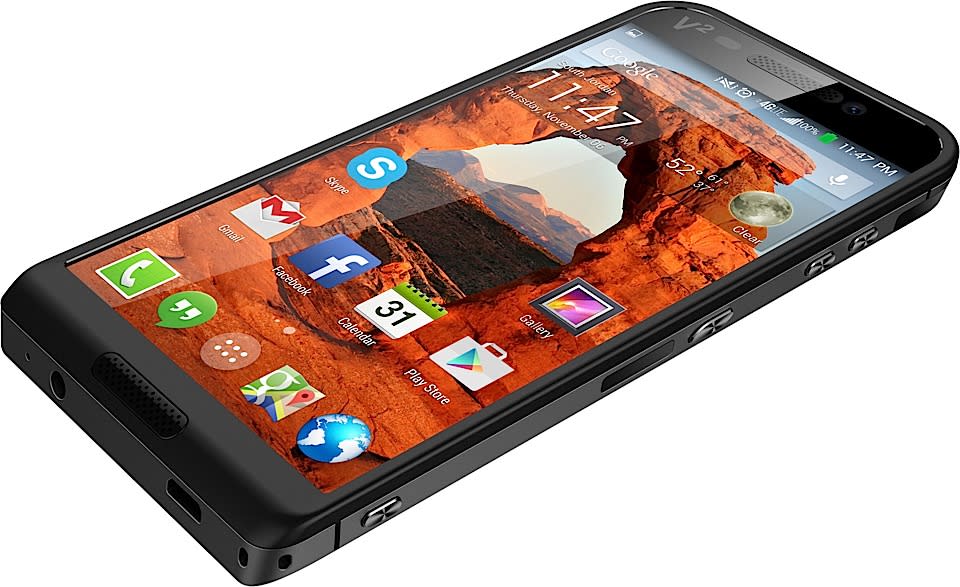 Saygus has been long forgotten over the course of time, only to be remembered by the most hardcore phone enthusiasts. The Utah-based phone maker enjoyed a brief moment in the spotlight at CES 2010 with its VPhone, a high-end (at the time) Android QWERTY device capable of doing two-way video calls over molasses-slow networks. The phone disappeared after becoming certified on Verizon's open development initiative in August 2011. Surprisingly, the company's not only alive and kicking, it's working on a brand new high-end phone called the V-Squared (V2?). The smartphone will come with a 5-inch 1080p display, quad-core 2.5GHz Snapdragon processor (the chipset is unknown, but we'd guess 801), 64GB onboard storage and expandable memory that will "best any competitor," 60GHz Wireless HD for low-latency wireless HD streaming, Qi wireless charging, 3D audio, a high-end camera with OIS, root access and a new type of biometric scanner on the right side of the device. It also says that it has a 3,500mAh battery, but a mysterious new tech is supposed to extend its life by 50 percent. We've obtained images of the V-Squared, which show an interesting angular design on the top and bottom, as well as a hardware camera shutter button.

Given its curious history with the vPhone, Saygus has a lot to prove. It's not easy to pick a company off of the ground after its first and defining device turns into vaporware, but that's exactly what Saygus is setting out to do. It took a year and a half to get certified by Verizon, by which time the device was completely obsolete and largely forgotten; it can't afford any delays on its new project. In order to get its foot in the door, a new player like Saygus will need to not only come out with a fantastic new device to grab consumers' attention, but also ensure it can follow through on its launch. We'll keep you posted as we learn more about Saygus' second shot at success.

In this article: android, google, mobilepostcross, saygus, saygusv2, v-squared, v2, vphone, vsquared
All products recommended by Engadget are selected by our editorial team, independent of our parent company. Some of our stories include affiliate links. If you buy something through one of these links, we may earn an affiliate commission.