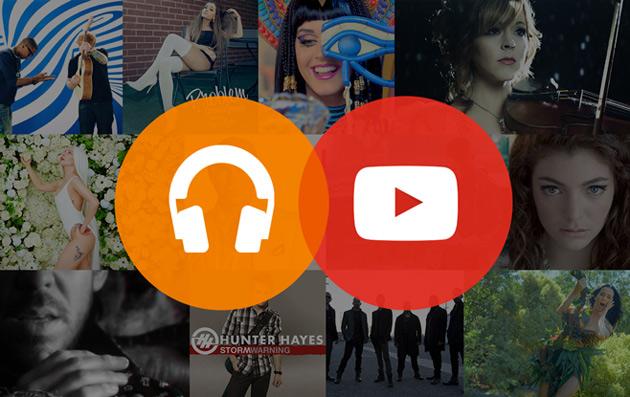 ​After over a year of rumors, YouTube today lays out details of its Music Key subscription service. So, what does it look like? Essentially it comes in two parts. Starting today, web and Android (iOS is coming soon -- Update: it's now here!) users will see a new music hub in YouTube. Here you'll find playlists, recommendations, trending songs/artists or just a quick route to that one darn track you can't (but please) stop playing -- all that usual stuff. Over the coming days, this will grow to include the ability to find, and play, artist discographies and full albums. This is the free part available globally, and mostly an attempt to organize what is already available on YouTube. It's the second part you're likely more curious about.

YouTube Music Key is the paid service we've been hearing about, and launches as a beta today in the US (plus Spain, Italy, Portugal, Finland and the UK). The service costs $10 (or £10/10€) a month, and gives you ad-free playback, the ability to listen in the background (essential for mobile users), offline music , endless playlists (like Spotify song-based radio stations) and -- most significantly -- access to the entire Google Play Music library. In short, one subscription gets you in to both of Google's large music platforms (video and audio). An update to the Play Music app will soon let you watch the official video for a song without having to break out to YouTube, and recommendations will now be based on your listening habits across both platforms (so be careful who uses devices where you're logged-in to YouTube!). This also means you'll be able to listen/watch via compatible services (like Sonos), and stream over Chromecast -- so it's going to be fairly versatile. If you're already coughing up the monthly fee for Play Music, this is clearly good news. The only problem is -- despite the big launch -- Music Key is launching as an invite-only beta. Exactly how you get on the list is unclear (you can try here), with YouTube saying it's inviting "our biggest music fans first." Those lucky listeners will get six months free, followed by a promotional lifetime price of eight dollars/pounds/euros. If there's nothing in your inbox/app alerts, perhaps there's still time to rack up a few more listens of that favorite B-side ("hundreds" of Indies are apparently signed up, despite early troubles) and bag yourself a place? If not, you'll have to wait at the velvet rope with the rest of us for the full launch in 2015.

In this article: google, google play music, mobilepostcross, music key, youtube
All products recommended by Engadget are selected by our editorial team, independent of our parent company. Some of our stories include affiliate links. If you buy something through one of these links, we may earn an affiliate commission.