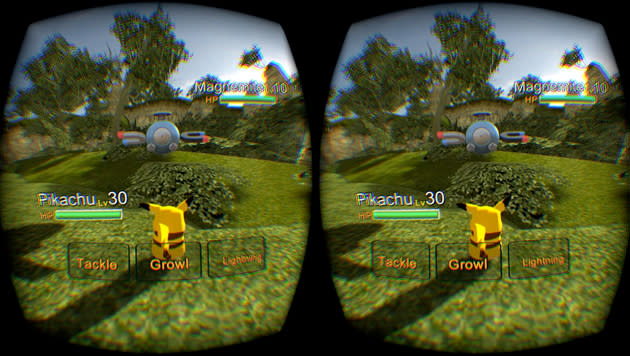 It may not be the first time someone's remade Pokémon for the Oculus Rift, but it's probably the most exciting. By pairing the VR headset with a Leap Motion and Voice Attack, players of the Unofficial Pokémon Alpha Prototype can even pick up Poké Balls and throw them at vanquished opponents. Of course, the title is just a short unofficial demo made by a fan named Tipatat. But it's available to download and try for yourselves.. at least until the lawyers get their hands on it. All we have to do is hope that someone at The Pokémon Company or Nintendo sees some potential in being able to walk through Pallet Town in this way.

In this article: Leap Motion, Oculus Rift, Pokemon, Unofficial Pokemon Alpha Prototype, video, Voice Attack
All products recommended by Engadget are selected by our editorial team, independent of our parent company. Some of our stories include affiliate links. If you buy something through one of these links, we may earn an affiliate commission.