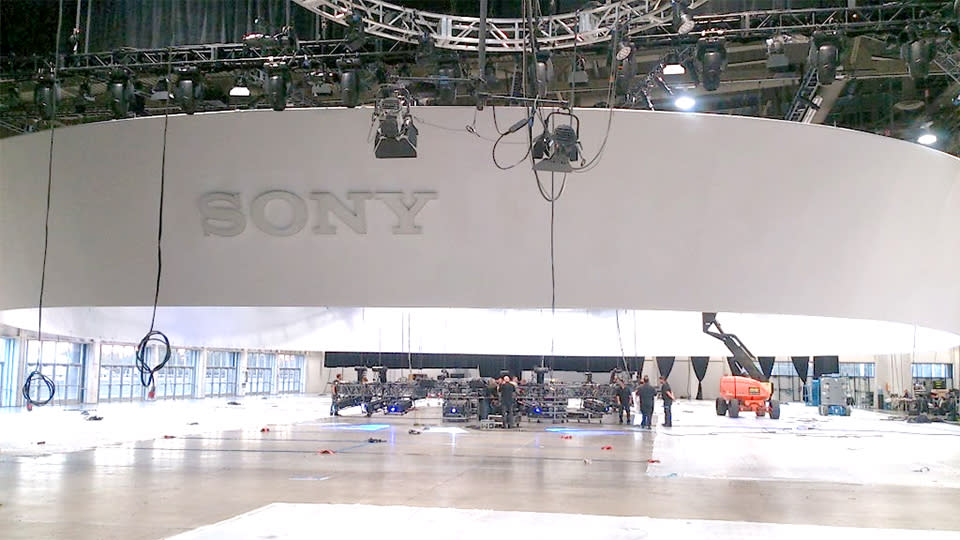 Didn't we just leave Vegas? Tech journalists the world over are probably asking themselves that question right now, and with good reason -- the 2015 Consumer Electronics Show is set to open its many, many doors in sunny Nevada in just a few short weeks. To celebrate (and prepare for) the world's biggest tech expo, we're taking a closer look at the some of the industry's most prominent players, starting with Sony's storied history at the show and where it's going next.

Sony's been a mainstay of the CES show floor for decades, ever since those heady days when the show split between winters in Vegas and summers in Chicago. Those early CES years were marked by Sony's hardware-pioneering prowess: new Walkman models in the '70s, incredibly tiny Beta camcorders in the mid-'80s and top-tier VAIOs in the '90s. And every once in a while, you'd catch a glimpse of a real game changer being born at the Sony booth. Consider the events of CES Summer 1991: Olaf Olafsson had revealed the company's plans for the Play Station (the spacing is important!), a Super Nintendo CD-ROM add-on borne of a partnership between Sony and Nintendo that would play games off of so-called Super Discs. But the day immediately following the announcement, Nintendo, fearing its loss of CD-ROM royalties, slipped a knife between Sony's ribs and effectively backed out of the deal. Nintendo was now going to partner with Philips to create yet another CD-ROM gaming gizmo. If you're a gamer, you probably know how this infamous story ends: Sony retaliated by launching a proper PlayStation console, dominating the 32-bit generation and setting a new sort of entertainment empire into motion. That same year, Sony announced its cultishly popular MiniDisc format (which quietly stuck around for 20 years before it officially died), and spent the rest of the '90s innovating products across its home theater, camera, mobile phone and media divisions. But the sprawling Sony proved ineffective at sustaining that momentum and, as the past decade showed, its innovation machine seemed to slow down a touch. Each year saw iterative improvements to the company's product lines, but nothing much in the way of game changers.

Hell, for a while there, it looked like the company's myriad kooky side projects were getting more attention than more substantive gadgets. Remember AIBO the robotic dog? And the QRIO? They've become the stuff of tech/pop-culture legend, if only because they were just weird and decidedly off Sony's usual, iterative beaten path. If nothing else, Sony's track record the past few years has been marked by caution. It's treaded into with mobile realm with dead ends like the Mylos, embraced Android with its Xperia line and launched iconic cameras like the Cyber-shot T1. Today's Sony is a different beast from the one that spooked competitors and rode high on a wave on innovation in the late '90s and early 2000s. It seems less confident and more reactive than it used to be. And honestly, who could blame it? The chasm between its popular, profitable divisions and the one's dragging down the company's bottom line couldn't be bigger. And more than a few analysts, like Jefferies' Atul Goyal, have said the Japanese giant's electronics business is now basically worth nil. That's why there's a new plan in effect: Sony's refocusing on product categories (i.e., its PlayStation gaming business and imaging) that have the most growth potential, and CES 2015 is where Sony will make its renewed case for electronics domination to the world. First things first, expect to see a familiar shift in the company's mobile philosophy: Sony's trimmed down its portfolio and plans to focus on a smaller number of smartphones than it has in years past. It's not like Sony has ever thrown spaghetti at the wall to see what sticks the way a company like Samsung has, but the time for the scattershot approach is over. That said, there's a pretty good chance the Xperia Z4 (and maybe an even bigger, Xperia Ultra cousin) will soon break cover in Las Vegas. We're barreling into CES leak season now, and early whispers about Sony's mobile lineup are already contradicting each other. If you take them at face value, then the new Xperia flagship will sport either a 5.2-inch 1080p screen or a more eye-catching Quad HD display, along with a Qualcomm Snapdragon 805 humming away inside that signature boxy body.

Today's Sony is a different beast from the one that spooked competitors and rode high on a wave on innovation in the late '90s and early 2000s. It seems less confident and more reactive than it used to be.

Sony took another stab at the wearables category last CES when it introduced the Core/SmartBand, a tiny little thing with a cool lifelogging concept and a dearth of staying power. It'll be interesting to see if (or how) Sony merges that sort of dedicated wearables line with its smartwatch play. After all, Sony's Android Wear-powered SmartWatch 3 just entered into a swelling market a few weeks ago. But even that's not a sure thing, as we've also seen images of a Pebble-esque, e-ink smartwatch surface too, a sign that the beleaguered titan is weighing the value of wearables as a way to boost its bottom line.

"Motorola's demonstrated that you don't have to tie your smartwatches directly to your smartphones to be somewhat successful," said Jackdaw Research principal analyst Jan Dawson. "I think that's the route forward for Sony too, and it might also be a good way to promote awareness of its smartphones, especially in the US, where they're very low-profile today." On the other end of the screen-size spectrum, Sony's guaranteed to show off some new Ultra HD televisions in just a few weeks. Duh. What's a little less obvious is just how important the company thinks Ultra HDTVs are to its future, if only because we're finally getting to the point where it actually makes sense to own one of the things. Prices have been slowly drifting down from the stratosphere since the first Ultra HD televisions debuted at CES a few years back, and this year's Black Friday shopping frenzy saw a handful of Ultra HDTVs from top-tier manufacturers like Samsung sell for under $1,000 (a tactic that Sony Electronics US President Mike Fasulo doesn't seem too fond of). And more importantly, the pool of content that makes use of all those extra pixels, some of which is owned by Sony, is starting to swell in significant ways.

Here's the thing, though: You'd do well to expect fewer models on the show floor this time around. Part of Sony's plan involves streamlining its TV selection for more impact, not to mention educating consumers like you and me about the virtues of Ultra HD. At least a few of those new sets will emphasize a new level of smarts in the form of Google's Android TV platform, of which Sony is a partner. And then there's PlayStation, one of Sony's most lucrative cash cows. There definitely won't be any PlayStation 5-level announcements at the show, but we will see more software teasers and proclamations, paired with mentions of hardware updates. Though last year saw the introduction of the Gaikai-based PlayStation Now service, a sort of Netflix for streaming full-on PS3 titles, it's unclear what Sony has in store at CES in January. PS Now's been in beta for the better part of six months, so we wouldn't be surprised if it graduated to a full-blown release at the big show. And, if we're lucky, we'll get a better sense of how the service could handle streaming PS1 and PS2 games to boot. Of course, we can't forget about Sony's Project Morpheus virtual reality hardware. The headset, and its handful of prototype games, seemed surprisingly polished the last time we checked in with Sony brass. And with competition from heavyweights like Samsung and Oculus, it's likely we'll be hearing more about Sony's bold push into VR. And what better place for the company to spread the word even further than in front of the world's nerds at CES 2015 in Vegas?

In this article: CES, ces 2015, ces2015, sony, sony ces 2015, sonyces2015, uk-feature
All products recommended by Engadget are selected by our editorial team, independent of our parent company. Some of our stories include affiliate links. If you buy something through one of these links, we may earn an affiliate commission.