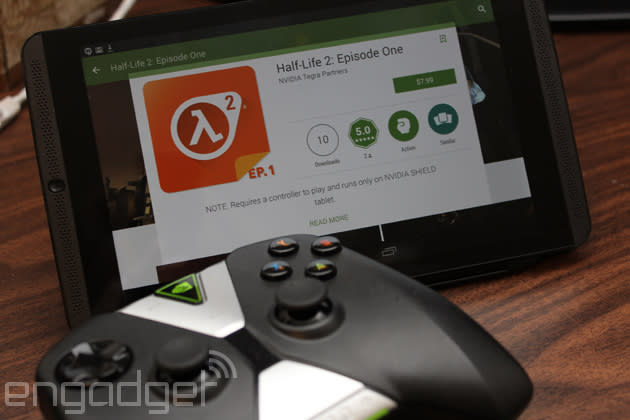 After successfully porting two of Valve's most popular franchises to the NVIDIA Shield, today's news is only natural -- Half-Life 2: Episode One is now available for download on Google Play as a Shield exclusive. The expansion's launch is notable not only as yet another high-profile PC game worming its way into the Android ecosystem, but also as a possible marker of something else: the slow death of NVIDIA's original Shield handheld. NVIDIA's original gaming portable is still available, but it won't run the platform's latest release: That's a tablet exclusive.

It's not the first tablet-exclusive game to come to the Shield: The slate launched with a handful of Tegra K1-optimized games, including a handful of native Android games and Trine 2. There were enhanced ports of Half-Life 2 and Portal on the tablet too, but those titles were available on the company's handheld Shield as well. Leaving out the portable isn't too surprising (Half-Life 2 ran significantly better on the tablet, after all), but be warned: Tegra 4 is apparently getting a little long in the teeth.

In this article: nvidia, NVIDIA Shield
All products recommended by Engadget are selected by our editorial team, independent of our parent company. Some of our stories include affiliate links. If you buy something through one of these links, we may earn an affiliate commission.