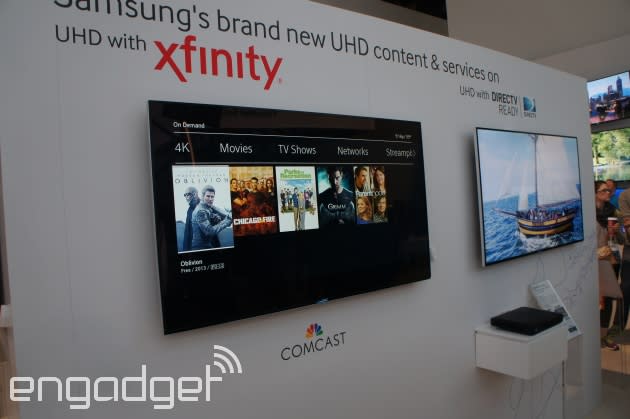 It's almost time for CES to come around again, but Samsung and Comcast are just getting around to fulfilling the promise of 4K streaming they made at the last show earlier this year (DirecTV launched last month). The Xfinity in UHD app arrives today on Samsung's 2014 Ultra HD TVs (which also have high-res video from the likes of Netflix, Amazon and Samsung's $300 hard drive add-on) and right now, it's offering up every episode of Chicago Fire, Suits and Covert Affairs at no additional charge to customers. In February, they'll be joined by Parks & Recreation (futuristic 2017 teaser trailer embedded after the break), but there's no word on content beyond that. Looking for 4K service on other platforms? Comcast VP Matt Strauss says it will come to other platforms with Xfinity TV Go access later in 2015, plus an upgraded X1 cable box that will launch next year.

In this article: 4k, app, comcast, hdpostcross, hdtv, samsug, samsung, streaming, ultrahd, xfinity, XfinityTv
All products recommended by Engadget are selected by our editorial team, independent of our parent company. Some of our stories include affiliate links. If you buy something through one of these links, we may earn an affiliate commission.