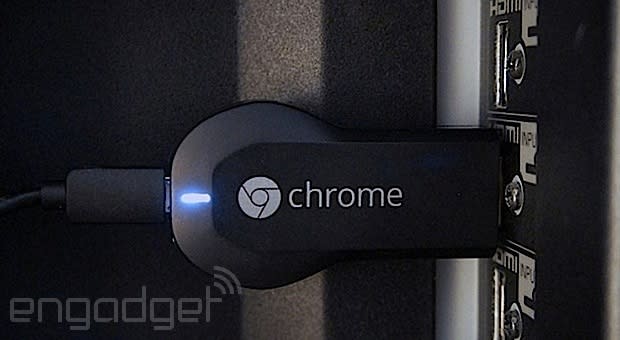 The numbers are out, confirming that, yet again Google's rolling in the dough. And on its Q4 investors call, Google informed us that, while ads still butter its bread, other sources of income are growing in importance -- non-advertising revenue essentially doubled in 2013, with $1.65 billion coming in the last three months, not counting Motorola, of course. That increase is due partly to a strong holiday season this year, powered by sales of Nexus devices (particularly the 5) and Chromecasts, and the Play Store continuing to move more apps and games.

Nikesh Arora, Google's senior VP and chief business officer, said that consumers' general shift toward mobile platforms has helped drive the Play Store's economics upward, and that in turn is driving many more folks to opt into Google Wallet. When asked how many Wallet users and credit cards Google's got, Arora played coy. "It's a number that we're happy with," but if you "take a look at the number of Android users out there," you can get a sense of the scale of the opportunity. Needless to say, it seems that Arora is feeling bullish about the prospects of both Wallet and the Play Store in 2014.

Oh, and before you go thinking that Nest will aid in the Nexus hardware lineup's upward trajectory, don't. Google CFO Patrick Pichette said that the goal of the acquisition is to help Nest scale up its market reach worldwide and that Mountain View will bring its vast resources to bear to make it happen. So, don't expect to see any Nest-ified slates or phones anytime soon.

In this article: chromecast, earnings, google, googleplay, hdpostcross, mobilepostcross, nest, nexus5, nexus7, q4 2013, video
All products recommended by Engadget are selected by our editorial team, independent of our parent company. Some of our stories include affiliate links. If you buy something through one of these links, we may earn an affiliate commission.