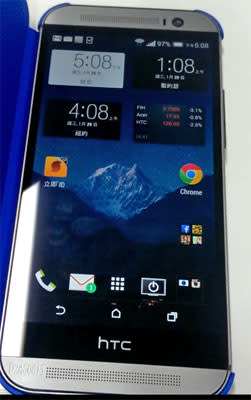 We hope you're ready for a rather interesting month for smartphones. Judging from the teasers, announcements and leaks, nearly all the major mobile players have something big to show in Barcelona next week. What you're looking at above is HTC's own next big thing, a new flagship smartphone that's doing the rumor rounds under the codename of M8. Looks familiar, right? However, there's already some notable changes, including an increase to three Android buttons, which are all now part of the screen. Having said that, according to mob.hr's leak, a bar with HTC branding means the screen will still takes up the same proportion of the phone's surface. Thankfully, the M8 appears to be made of metal just like last year's One, with the same micro-drilled holes for the speakers. According to this leak, expect a flip-top cover to go along with it too -- presumably with peep-holes for both of those rear-facing cameras.

In this article: htc, htcone, leak, m8, mobilepostcross, mwc, mwc2013, one
All products recommended by Engadget are selected by our editorial team, independent of our parent company. Some of our stories include affiliate links. If you buy something through one of these links, we may earn an affiliate commission.