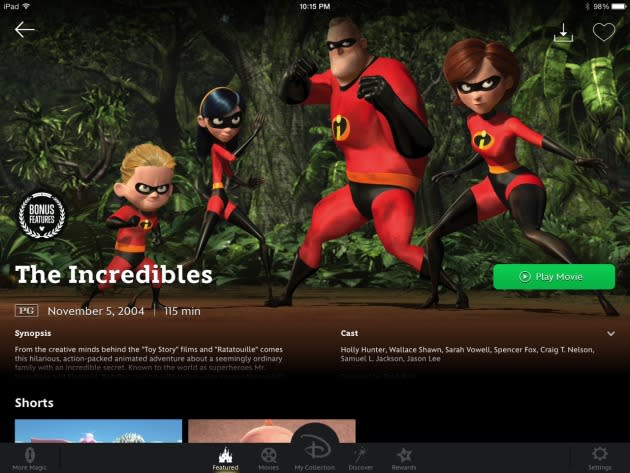 8
The app is built using Disney's proprietary digital rights locker, KeyChest. A technology we've been hearing about for years -- and part of the reason Disney/Apple haven't joined in with Ultraviolet digital copies -- it could help Movies Anywhere stretch beyond iOS to other platforms in the future. As originally designed, it can work with any studio, DRM system or digital video store that wishes to participate, and unlock copies purchased via one storefront on any other automatically. That could include Ultraviolet shops like Vudu and Redbox Instant, or those going it alone like Amazon, Google Play and Comcast video on-demand -- not to mention other hardware platforms like Android and Roku. Of course, Disney has talked up the buy-once play-anywhere tech since 2009 and it's only now arriving on a single platform and store, so patience may be required.

Source: Disney (iTunes), Disney Movies Anywhere
In this article: apple, Disney, disneymoviesanywhere, hdpostcross, iTunes, keychest, mobilepostcross, video
All products recommended by Engadget are selected by our editorial team, independent of our parent company. Some of our stories include affiliate links. If you buy something through one of these links, we may earn an affiliate commission.