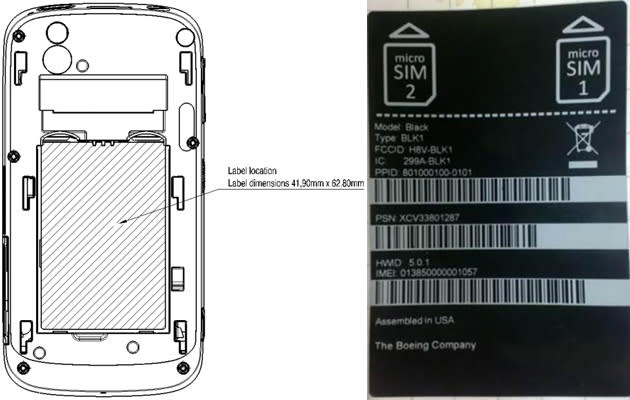 Boeing said way back in 2012 that it was working on a high-security Android smartphone. Almost two years later, it appears that the company is finally close to a launch -- the hardware, identified as Black, has just passed through the FCC. It's built for AT&T's LTE and HSPA networks, and will be rare among American phones in carrying dual SIM slots. We're not expecting it to be a media powerhouse when the label dimensions hint at a mid-size device, though. Boeing hasn't formally revealed Black yet, but it's doubtful that you'll find it at your local carrier store. This is more likely to be a direct-order device for corporations and the military, and it may carry a premium over the more consumer-oriented Blackphone.

Update: Boeing has officially revealed the Black on its website and it looks like the phone offers more than just security, it's also got a modular design. That means G-men can attach new backplates to give the Black satellite phone or radio capabilities, solar power or even biometric sensors. Oh, and after doing some further digging in the FCC's docs, it turns out that, should any nefarious curious types try to take the phone apart, it'll delete all data and software on the Black automatically, Mission Impossible-style.

In this article: android, att, black, boeing, boeing black, dualsim, fcc, h8v-blk1, mobilepostcross, smartphone
All products recommended by Engadget are selected by our editorial team, independent of our parent company. Some of our stories include affiliate links. If you buy something through one of these links, we may earn an affiliate commission.