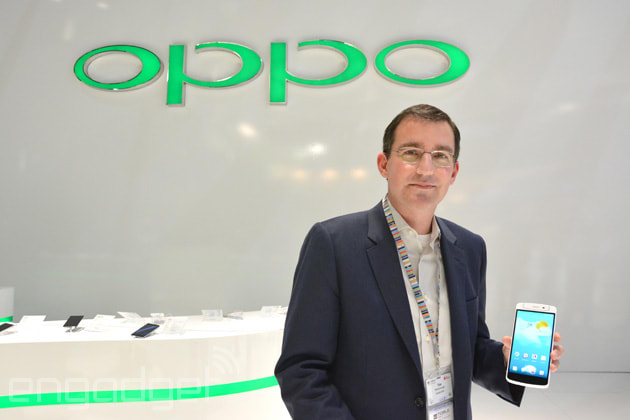 Despite Qualcomm's odd stance on octa-core and 64-bit in the past, the company has clearly changed its mind since last week's launch of its Snapdragon 615, which includes both features. Qualcomm's marketing VP Tim McDonough, who briefly spoke to us after his meeting with Oppo at MWC, admitted that this new chip is partly aimed at the ever-demanding Chinese market.

"It's very interesting. Consumers in China want octa-core. It's very high on their list; while in the US and Western Europe, it's totally other things that consumers want," the exec said. "So we've really recognized that if that's what Chinese consumers want, that is what our Chinese customers, our OEMs want, and Qualcomm has to care for that need; so that's what we're doing."

"Consumers in China want octa-core. It's very high on their list."

Of course, Samsung and MediaTek are already well ahead in the octa-core game, whereas Huawei, AllWinner and Qualcomm will be joining in later this year. In China, it's really MediaTek that's posing the biggest threat to Qualcomm with its cheaper and quicker-to-make turnkey solutions, not to mention its upcoming 64-bit chip and its first LTE-enabled chip. While Qualcomm's own octa-core offering won't arrive on devices until Q4 this year, McDonough's confident that his company still has the upper hand with its branding and LTE know-how.

"I think part of what's really advantageous to us is that customers that believe in brand really believe in Qualcomm," the exec said, when asked about how he'd tell his Chinese clients to pick Qualcomm over MediaTek. "If you were to look at the preference for our brand over our competitor's brand, it's sometimes six to one, so that they know that end users that are savvy, that are doing their research before they buy a phone -- it is a big purchase -- [there is a] six-to-one preference."

McDonough added that with Qualcomm already on its fourth-generation LTE technology, it'll be hard for others to catch up from a technology standpoint, especially when most of them "haven't really shipped anything yet." For the one unnamed company whose LTE chipset is featured on a recently launched Chinese phone, Qualcomm was quick to debunk its claim of having the same LTE performance. In its own lab test, Qualcomm claims its Gobi modem had 25 percent more LTE throughput while using 25 percent less power; and unlike the other device, the Gobi never stuttered while streaming 4K video over LTE.

"So when you're an OEM and you want to take advantage of the growth on LTE, we're the tried and really proven provider for that," McDonough continued. "Whether it's doing that in China with the Chinese carrier, whether it's really your opportunity to say that this SKU that I'm building works in China, because it's Qualcomm that has all the modes and all the bands. I can ship it into Southeast Asia; I can ship it into Europe; I can ship it into the United States. It's really unlocking business potential."

In this article: china, featured, features, interview, lte, mobilepostcross, mwc, mwc2014, octa-core, oppo, qualcomm, snapdragon, td-lte, TimMcDonough
All products recommended by Engadget are selected by our editorial team, independent of our parent company. Some of our stories include affiliate links. If you buy something through one of these links, we may earn an affiliate commission.