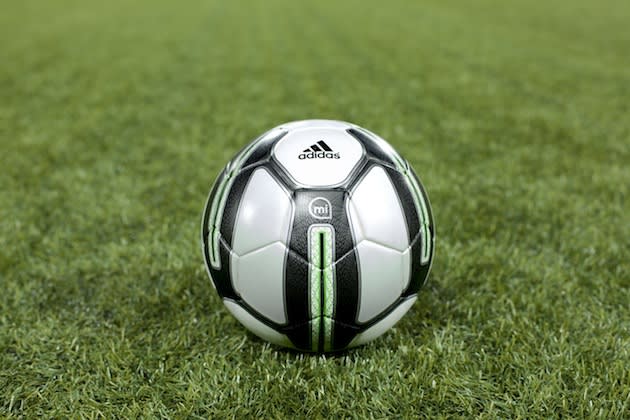 In an effort to expand its miCoach line of sporting gear, Adidas has now launched a smart ball for football (aka soccer) players. With an array of motion sensors featured inside, this new intelligent, kickable sphere can track a ton of data and send it right to your iOS device -- Adidas hopes it will all be useful to help you improve certain skills during training. The freshly announced miCoach Smart Ball, which has been in development for more than a year, uses your iPhone (or iPod touch and iPad) to show you exactly where and how hard it is being struck. In addition to that, you can use the miCoach system to see the visual trajectory of the ball, as well as the exact impact points.

Adidas is also using the companion iOS app as a hub that can be used as a training planner, allowing you to keep track of your shooting records and offering personal challenges designed to make your overall football skills better. The miCoach Smart Ball is available now for $299, and you can get it directly from Adidas or through one of Apple's retail channels. 7
Source: Adidas
In this article: Adidas, Adidas miCoach, Football, miCoach, miCoach smart ball, miCoachsmartball, smart ball, Soccer, Soccer ball, Soocer, Sports
All products recommended by Engadget are selected by our editorial team, independent of our parent company. Some of our stories include affiliate links. If you buy something through one of these links, we may earn an affiliate commission.