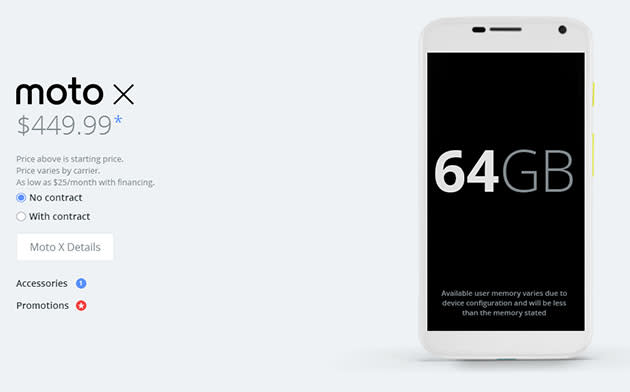 Motorola has just released a 64GB version of its customizable Moto X handset, and is extra keen to get one in your hands. It just launched a promotion that will allow you to put a nominal $.01 deposit down on that or any Moto X model, and customize it using Moto Maker. It'll then ship it out, and once you've had a look you can either pay for it (the new 64GB version is $450) or send it back, with no hard feelings or strings attached. The cynical among us may say that it's anxious to unload stock as a result of its acquisition by Lenovo and the resulting Texas plant closure, though Motorola says otherwise. Either way, it seems sure that you won't be able to resist a Moto X of your own design once it's in your hands. We don't disagree -- but for that price, we're also tempted by other options.

Update: It's too late for the penny promotion, sorry folks! After barely getting started, Motorola now says it has already sold all the Moto X handsets allotted for the try-then-buy deal.

In this article: 64GB, mobilepostcross, MotoMaker, motorola, motox, penny
All products recommended by Engadget are selected by our editorial team, independent of our parent company. Some of our stories include affiliate links. If you buy something through one of these links, we may earn an affiliate commission.