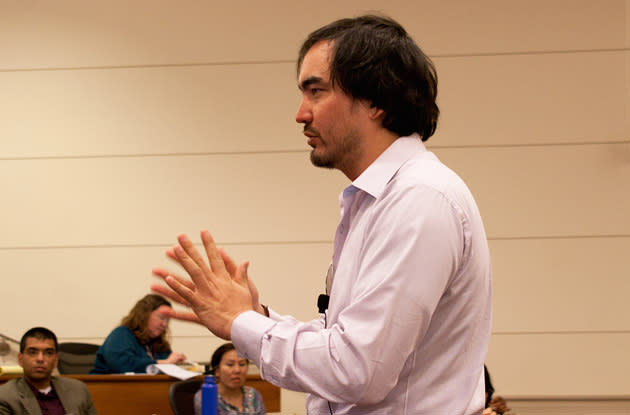 Many will tell you to run for office if you really want to change the political status quo. Tim Wu, the professor who defined the term "net neutrality," has clearly taken that advice to heart -- he's now running for lieutenant governor in New York state. As he explains to the Washington Post, he sees this as a chance for state governments to get more of a say in both net neutrality issues and telecom mergers. People aren't happy with "concentration in the media industries and tech industry into political strength," Wu says.

He'd particularly like to pressure New York regulators into challenging Comcast's proposed acquisition of Time Warner Cable. While federal law might let the takeover go ahead, the state isn't beholden to those rules; it might just stymie the entire deal if it decides that the merger hurts consumers. Wu notes that New Yorkers are sensitive to both never-ending price hikes and telecoms that act with seeming impunity. They've been especially upset with Verizon, which both limited its FiOS deployment in the state and refused to reinstall some landline phone service in the wake of Hurricane Sandy.

Wu is aware that he and the gubernatorial candidate he's running with in the Democratic primary, Zephyr Teachout, are "underdogs" compared to incumbent Andrew Cuomo. All the same, he believes that there's at least some chance of victory. He also sees Teachout as a good match -- she's interested in a company-independent approach to supporting the state economy, so it only makes sense that she gets help from a net neutrality advocate that won't play favorites. Whether or not the two beat the odds, they may at least draw more attention to telecom policies that are frequently relegated to the sidelines in political debates.

In this article: comcast, government, hdpostcross, internet, netneutrality, newyork, regulation, timewarnercable, timwu, zephyrteachout
All products recommended by Engadget are selected by our editorial team, independent of our parent company. Some of our stories include affiliate links. If you buy something through one of these links, we may earn an affiliate commission.