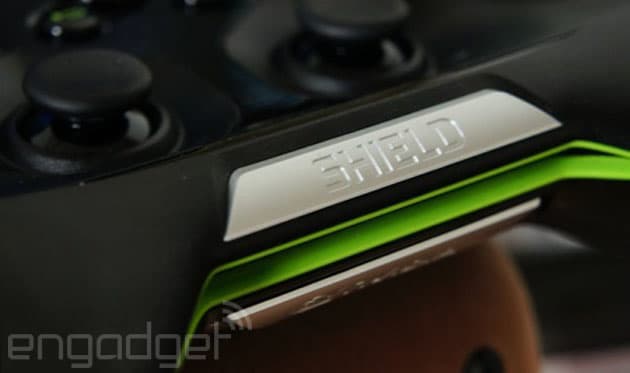 The next version of NVIDIA's funky handheld Shield console will actually be called the Shield Tablet, according to a listing from a testing body called the Global Certification Forum (GCF). There's been much speculation about the device, especially after a diagram of what looks like the controller showed up at the FCC. That's usually a sign that a product is imminent, and we were told last year that a new model could come sooner than expected by NVIDIA CEO Jen-Hsun Huang himself (see the video below). As a reminder, the original Shield is a portable, Tegra-powered console, with a built in controller and 5-inch screen that can run Android games and apps. But it's main raison d'etre is to wirelessly stream games from your NVIDIA-equipped PC, making it a rather nichey device. The GCF page confirms the "Shield Tablet" name that NVIDIA posted by mistake on its own site, and adds the fact that it'll have 4G capability.

So why a tablet? The original Shield is just a tablet with a controller (permanently) attached, so separating them makes sense. That way, NVIDIA could market it as a high-end tablet, a handheld gaming device and possibly a home console that'd plug into your TV. It's also feasible that more than one Shield device is coming, though that seems less likely. Either way, a mysterious benchmark for an NVIDIA Mocha tablet gives us a clue about the specs, which are identical to the new Xiaomi Mii pad. That device has a 7.9-inch, 2,048 x 1,536 screen, with 2GB of RAM and NVIDIA's new Tegra K1 quad-core CPU. If the Shield Tablet is similarly equipped, it'd be much more capable of running serious games than the original, as shown in the video below (which features NVIDIA's reference Tegra K1 tablet, by the way). 4G connectivity would also make it much more usable on the road. If all this pans out, it'd make sense -- allowing the Shield to be a standalone tablet might be the final carrot to entice gamers into throwing their cash at it.

In this article: nvidia, nvidiashield, shield, shieldtablet
All products recommended by Engadget are selected by our editorial team, independent of our parent company. Some of our stories include affiliate links. If you buy something through one of these links, we may earn an affiliate commission.