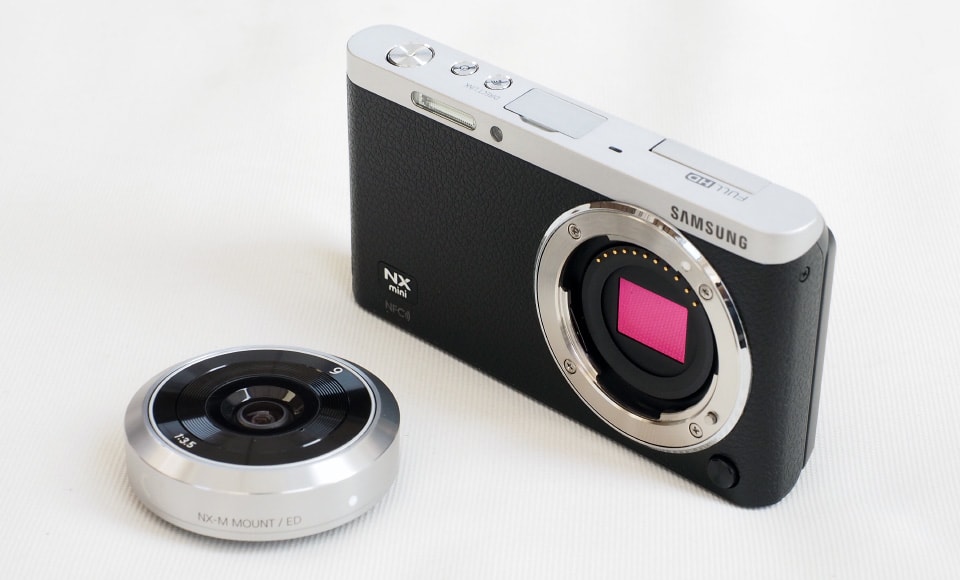 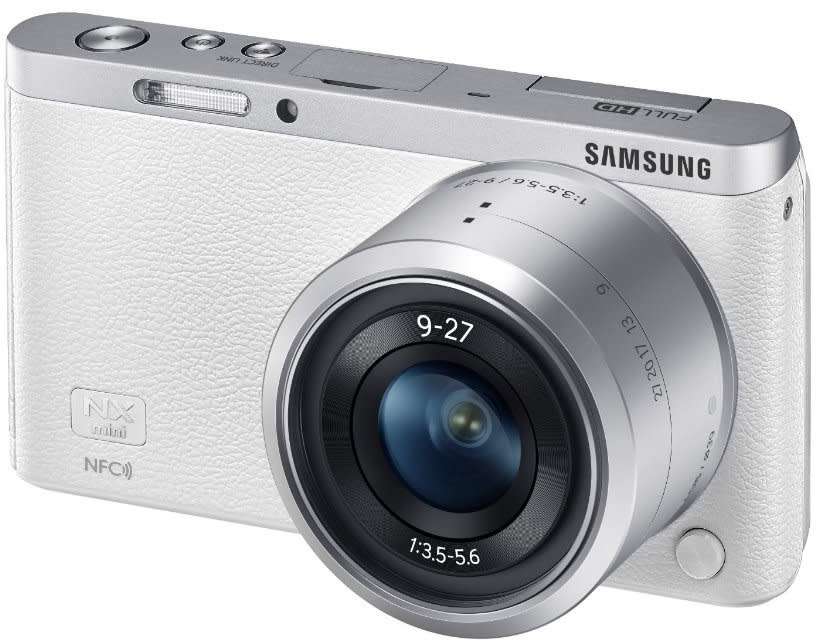 It's been a long journey, but Samsung's managed to build out a compelling camera lineup that has something for everyone. Pros can get the high-end NX30; cameraphone addicts can pick up the Galaxy K Zoom; and selfie fanatics will probably go for the $450 NX mini, a tiny interchangeable-lens camera with a flip-up LCD that fits in your pocket. It's that latter model we're checking out today, and while it's hardly a professional workhorse, Samsung's entry-level mirrorless cam is a practical choice for the largest demographic any electronics manufacturer could hope to target: regular people.

Samsung's NX mini is cheap, pocketable and a lot of fun to shoot with.

How would you rate the NX mini?
We want to hear what you think. Post a quick review now to join the conversation!
Write a review

The biggest selling point here is a super-slim, lightweight body that you can slip into a handbag, or even a pants pocket. Without a lens attached, the NX mini is no larger than many compact point-and-shoots, and when you stick on the 9mm (24.3mm, 35mm equivalent) f/3.5 kit lens, it's not much thicker. There's a 1-inch, 20.5-megapixel CMOS sensor that's identical in size to what you'll get with very high-end compacts, like the $800 Sony RX100 M3, but quite a bit smaller than the APS-C sensor manufacturers include with mirrorless cameras like the Alpha 6000 or the aforementioned NX30. 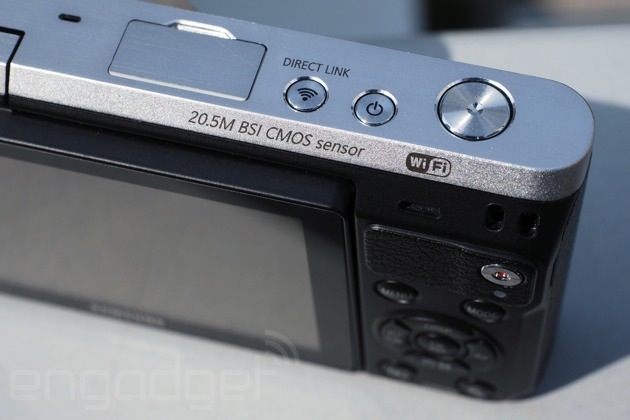 Of course, a slim design also means you'll have to put up with some limitations. There are only a few buttons on the rear, and they're adorably small. They're adequate for petite hands, but many adults will need to use a fingertip to do things like accessing the menu, switching to a different mode or reviewing captured images. There are miniature buttons on the top, too, for turning on the power or launching into Samsung's WiFi mode. Fortunately, the shutter release is nearly full-size, and once you launch the menu, you can adjust many settings simply by tapping the 3-inch, 480 x 320 touchscreen, which also flips up 180 degrees for self-portraits, or at any angle in between for shots below eye-level, or overhead if you flip the camera upside-down.

Another peculiarity is the microSD card slot, which Samsung's now including with many of its point-and-shoot cameras. It's not like microSD cards are difficult to come by or much more expensive than their full-size counterparts these days, but they are tricky to insert. Plus, they're incompatible with most laptops for downloading pictures and video (without an adapter), and very easy to misplace. The battery, however, is large enough for full-day shoots, at 2,330mAh, and the camera charges via micro-USB, which I prefer personally, though some users will want to have an external charger (which you won't find in the box). 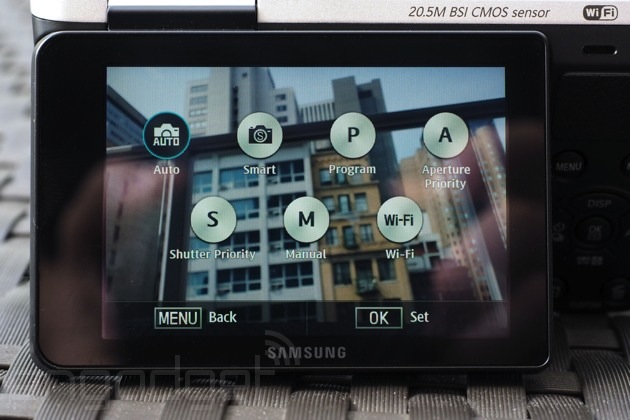 As for the UI, there's nothing out of the ordinary here. You can control just about everything using the touchscreen, though you can also use the four-way controller on the side to navigate if you prefer. Settings are limited, and therefore relatively straightforward, so you should be able to find what you're looking for with only a few taps.

There is a dedicated mode button, but there's no room for a dial, so you need to tap the screen to move among auto, smart, program, aperture or shutter priority and manual options. Once you've made your pick, you can tweak settings using a touchscreen function menu. In manual mode, this can be a bit cumbersome, since you need to go back in the menu to adjust aperture and shutter speed. But this probably isn't a camera most owners will use with a manually dialed-in exposure. 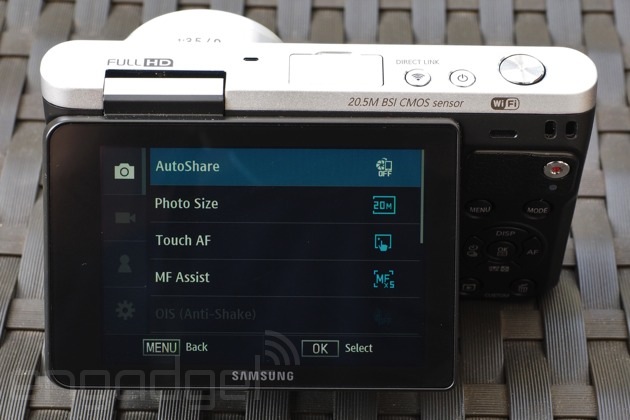 There's also a WiFi mode, which lets you access a variety of wireless sharing options. You can use MobileLink to send photos from the camera to a smartphone or tablet, or Remote Viewfinder, which miraculously lets you access all of the NX mini's shooting modes, including manual, from another device. You also have access to Samsung Home Monitor, which requires its own smartphone app and lets you use the camera to keep an eye on a child, for example, assuming your camera and phone are connected to the same WiFi network. Additionally, you can back up photos via WiFi, post directly to the web or send pictures in an email, all directly from the camera. 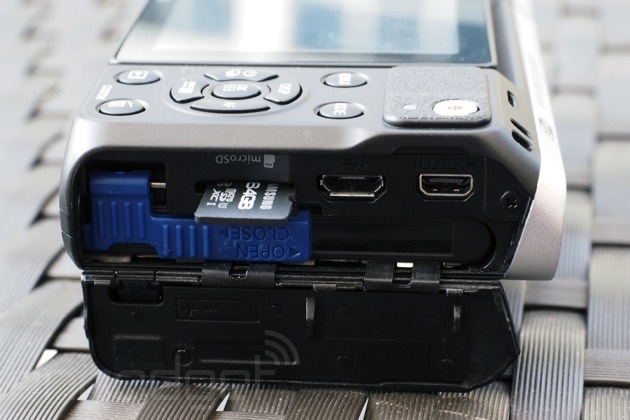 I really enjoyed shooting with the NX mini. The camera performed as expected every time when shooting outdoors or in decent lighting conditions -- low-light photos didn't turn out nearly as well (more on that in the image quality section below). The camera is fairly quick to boot up and you only have to wait a moment for the bundled 9mm lens to extend. There is a noticeable amount of focus hunting, but in bright light you can fire off a shot very quickly. Dim scenes are another story, but the NX performed reasonably well when the (oddly green) focus-assist light was turned on.

The camera offers a few positive surprises on the performance front, including a 6 fps consecutive-shooting mode that lets you capture full-resolution RAW or JPEG images. If you're willing to settle for 5-megapixel shots, you can also choose from three burst modes, including 10, 15 and 30 frames per second. The clever selfie mode launches as soon as you flip the display forward -- you can access it directly even when the camera's powered off. When you press the shutter release, the camera will start a three-second countdown, giving you enough time to reposition before it captures an image. 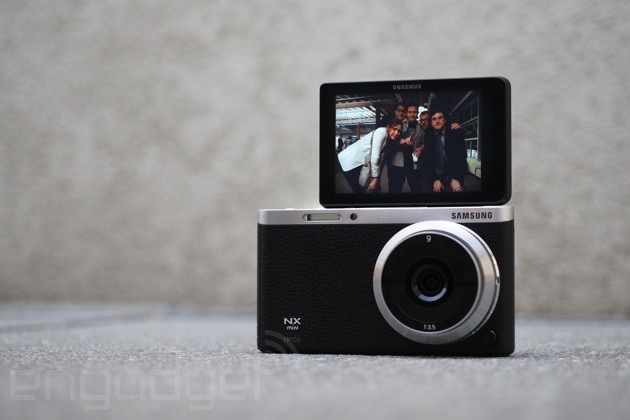 There's a 1/16,000-second maximum shutter speed, letting you shoot at larger apertures in bright sunlight, though even at f/3.5, you won't capture much bokeh (blurred backgrounds) due to the smaller sensor size. The sensitivity ranges from 160-12,800, or 25,600 in extended mode, while videos can be captured at 1080p, 720p, VGA or 320 x 240, all at 30 frames per second. Battery life is rated at 650 shots with the 9mm lens or 530 shots with the 9-27mm zoom lens. That should get you through a full day of shooting on vacation, assuming you don't spend hours reviewing pictures on the display or transmitting photos via WiFi.

The NX mini has a 1-inch sensor, so it's reasonable to expect image quality to be superior to what you'd get with a typical point-and-shoot. But the camera's no match for higher-end mirrorless models or even an entry-level DSLR. I did some casual shooting over the span of one month in San Francisco, Taipei and Austin, Texas. Results were generally quite solid with daytime shoots, but indoor photos and shots captured at night fell a bit short. The 9mm pancake lens excludes optical image stabilization, so captures at slower shutter speeds are often quite blurry, particularly when you're holding the camera at a distance to shoot a selfie. Let's take a look at some samples. 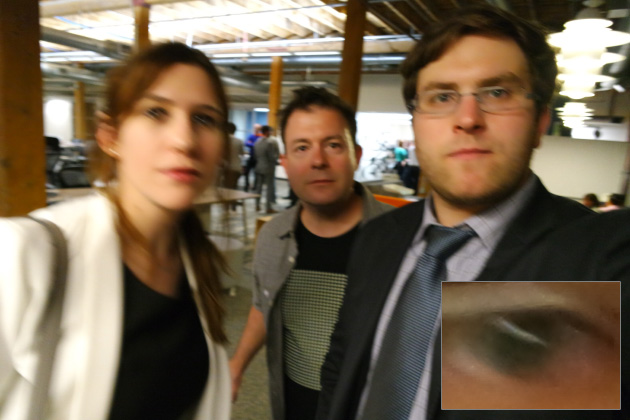 Here's a typical group selfie. The camera opted for an f/3.5 aperture at 1/30 second, with a sensitivity of ISO 3200. That would have been fine when paired with image stabilization, but without OIS, what you get is a blurry mess. If you're taking similar selfies in low light, capture several frames at once or use the built-in flash to guarantee a usable image. 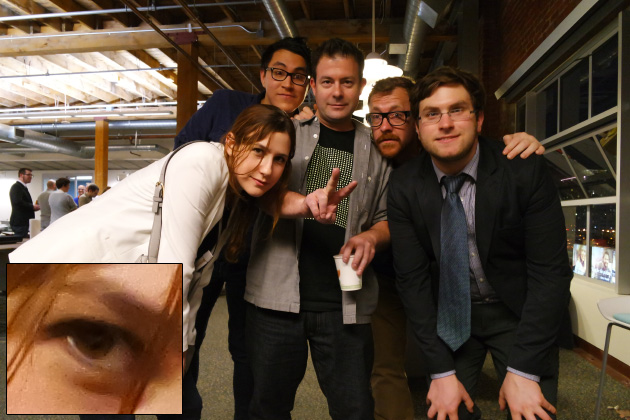 This f/3.5, 1/30-second exposure was much more successful, thanks to a nearby table that helped to prop up the NX mini. Noise is barely visible at ISO 1600, even in the 1:1 inset view, and colors and exposure are accurate. 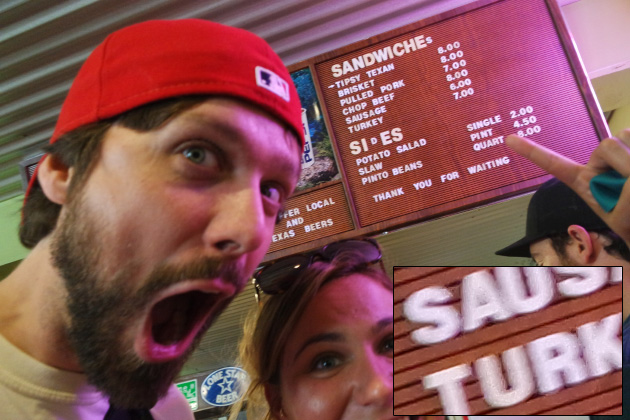 With instant access as soon as you flip up the LCD, it's easy to capture spur-of-the-moment selfies, such as this f/3.5, 1/30-second exposure at ISO 1600. Unfortunately, the camera opted to focus on the background, though even details there are slightly blurry due to the absent OIS. 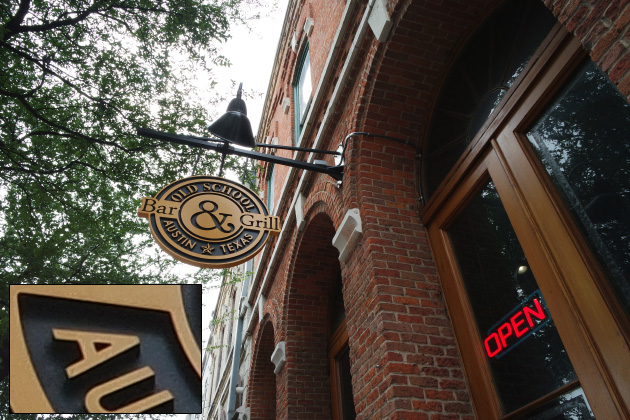 Ordinary daytime shots turn out just fine, such as this f/6.3, 1/125-second exposure in downtown Austin. Details are sharp, and there's not much noise to speak of, thanks a sensitivity of ISO 200. 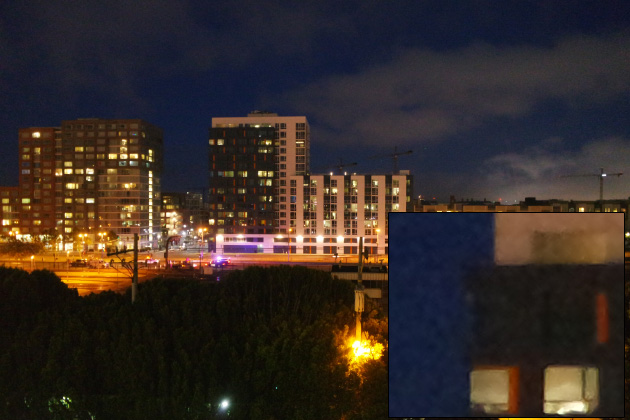 Like the supported selfie up above, this f/3.5, 1/8-second night scene in San Francisco is relatively sharp thanks to a nearby table, which served to anchor the camera. Captured at ISO 3200, noise is visible in the 1:1 inset, but wider views look fine. 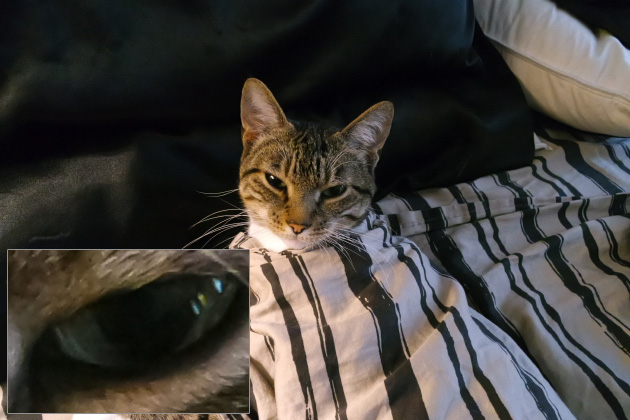 We call this a Tuna taco (Tuna's the cat). She held perfectly still for this f/3.5, 1/50-second shot, which sports relatively sharp details and low noise despite the high sensitivity of ISO 6400.

The NX mini shouldn't be your first pick for shooting video. Quality is decent in brighter conditions, but without integrated image stabilization, hand-held shots are shaky at best, as you can see in the sample reel above. The camera also struggled with focus, especially when moving between subjects. The onboard microphone also failed to capture clear audio from a subject just a few feet away. Sharpness and exposure, however, are perfectly fine. 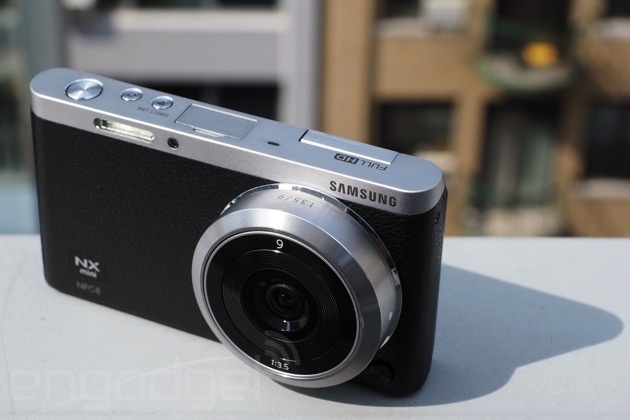 Samsung's in a unique position with the NX mini. There isn't anything quite like it from another manufacturer, though the $450 Nikon 1 S2 offers an attractive, colorful design with a similar sensor size and kit lens range. It's also quite compact, though noticeably thicker than the NX. If you're a pro looking for a high-quality camera that you can slip into a pocket, the $800 Sony RX100 M3 is a stronger contender, with a superior lens, better image and video quality and much more comprehensive manual controls. It also has a flip-up LCD and a pop-up electronic viewfinder.

If you're in the market for a mirrorless camera, but you're not set on the mini's compact size, Sony's $800 (with kit lens) Alpha 6000 is an excellent pick. The sensor is significantly larger, so you'll get better image quality, particularly in low light, and Sony has a much broader selection of lenses available for its mirrorless series. Samsung's NX30 is also a solid option, priced at about $800 with an 18-55mm lens. The NX mini is also available in a kit with a 9-27mm (24-73mm, 35mm equivalent) f/3.5-5.6 zoom lens for $450. 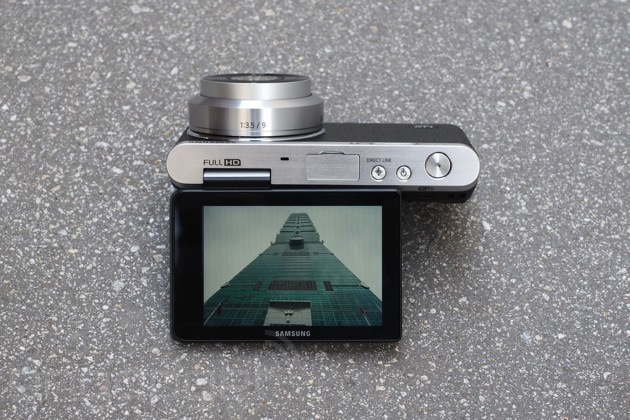 I was skeptical when Samsung first demoed the NX mini, having seen several manufacturers fail to deliver a great camera within a very small package. Pentax's infamous Q was tiny, but it was also spectacularly overpriced and an underperformer across the board, due in no small part to its small sensor and inadequate lenses. Nikon's initial lineup of mirrorless cameras, the V1 and J1, fell short as well. Samsung's NX mini introduction is well-timed, however, with young casual photographers now focused on style and selfies above all else. The NX mini is hardly the most capable mirrorless camera on the market, but at $450 with a lens, it's a very solid buy.

In this article: camera, cameras, ilc, mirrorless, nx, nxmini, review, samsung, video
All products recommended by Engadget are selected by our editorial team, independent of our parent company. Some of our stories include affiliate links. If you buy something through one of these links, we may earn an affiliate commission.